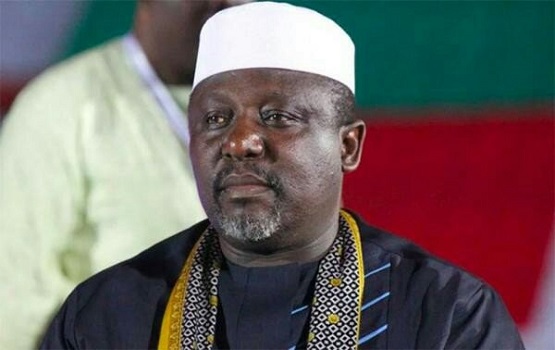 Former governor of Imo State, Senator Rochas Okorocha has run to a Federal High Court in Lagos for an order of perpetual injunction, to restrain the state government and its agents from arresting, detaining or acting in a manner that infringes on his rights.

His successor, Emeka Ihedioha had recently ordered a citizen arrest on Okorocha. The order followed an alleged attack on an official of the state government by thugs said to be Okorocha’s supporters.

But Okorocha in a suit filed through his counsel, Alaezi Nmezi prayed the court to declare the order for his arrest and detention by the state government as unconstitutional, illegal, unlawful and violation of his rights.

He listed Imo State government, Attorney General of the state, Secretary to State Government (SSG) and the chairman, Imo State Property Recover Committee as first, second, third and fourth respondents in the case.

Okorocha, who currently serves as Imo West senator asked the court to enforce his fundamental rights under the Nigerian Constitution and the African Charter on Human & People’s Rights Act.

The governor also asked the court to grant him a consequential order for “general aggravated and exemplary damages against the respondents, amounting to N150 million, for the unlawful, illegal and unconstitutional violations” of his fundamental rights, in addition to the cost of prosecuting the matter estimated at N5 million.

Governor Ihedioha has not allowed Okorocha to rest since the former governor handed power to him on May 29.

The media has been awash by several allegations of graft allegedly committed by Okorocha, his family members and cronies when the senator was in charge of Imo State government from 2011 to 2019.