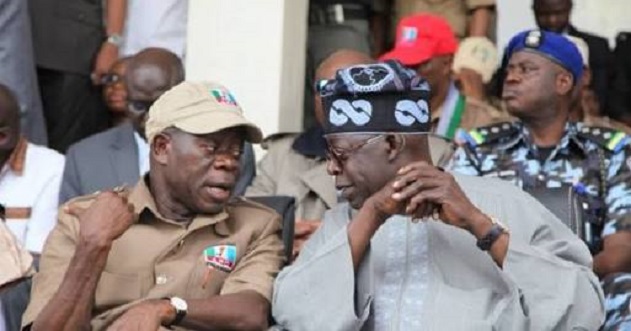 Despite announcement of cancellation of Tuesday’s All Progressives Congress (APC) Lagos governorship primary by the election committee sent by the National Working Committee (NWC) of the party, National Chairman of the APC, Adams Oshiomhole, appears to have dismissed the cancellation and affirmed the primary.

But briefing newsmen shortly after meeting President Muhammadu Buhari behind closed doors at Aso Villa, Oshiomhole said the conduct of the primary was in order.

He said the NWC was in charge of the exercise and that the situation was under control.

“I told the president that the primaries held as planned and everything is being done to ensure there is no violence because democracy doesn’t flourish with violence,” he said.

“Nigerians must begin to learn how to differ in opinion and in choice without fighting; this is something people have to acquire over time.

“For me, I’m excited that if we can do it in Lagos it can be done anywhere. Everything that is being done is done under the control, supervision and direction of the NWC.”

Meanwhile, the APC Lagos Chairman, Alhaji Babatunde Balogun, has announced the results of the primary, as follows:

He therefore declared Sanwo-Olu the winner of the primary and the duly elected candidate of the APC for the 2019 Lagos governorship election.