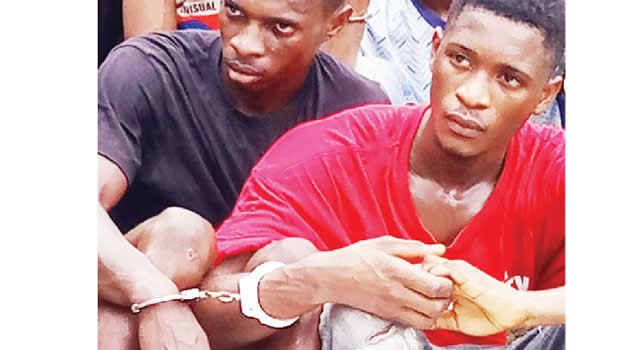 Police operatives in Cross River have a arrested a gang of teenage robbers who allegedly killed a 58-year-old woman simply identified as Doris Andy Inyang in Calabar, the state capital.

The woman was reportedly raped and killed at her residence at the State Housing Estate, Calabar, on April 13, by a four-man gang who also made away with her valuables including jewellery, phones, Automated Teller Machine (ATM) cards, money and an unregistered Nissan Sentra.

Two of the suspects, Mighty Omini (18) and Godwin Nyenine (19), were arrested with the car.

Before their arrest, the woman’s son had taken to Twitter to announce his mother’s murder.

Omini, who was paraded alongside his accomplice at the command headquarters in Calabar by the state’s Commissioner of Police, Sikiru Akande, said he was contracted to drive the car from the late woman’s house with the promise of N500,000.

He said: “I was not involved in the killing of the woman. I was only invited to come and drive the car which was parked over there.

“The leader of the gang, Udobong, said there was a car I would drive out of his compound and he would pay me N500,000.

“We just discovered that the woman is dead. I feel very bad. If I knew that someone’s life would be involved, I wouldn’t have done it because I have a younger one and a mother who is young.”