QuickRead: Buhari’s 12th London trip for medicals. Four other stories we tracked and why they matter | Ripples Nigeria 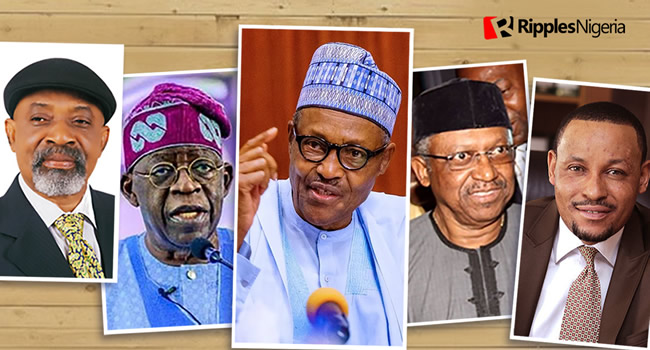 President Muhammadu Buhari, against one of his publicly stated campaign rhetorics, traveled to the UK, in the course of last week, for his 12th medical check-up.

The Chairman of the Code of Conduct Tribunal (CCT), Danladi Umar, was also in the news for the wrong reasons when he threw caution to the winds and became a ‘kick boxer’ by battering a hapless security personnel at a shopping plaza in Abuja.

We also tracked three other stories for your pleasure and hope you will enjoy them.

On March 30, President Muhammadu Buhari jetted out to London for another round of medical check-up, making this the 12th time he will be traveling to the UK for such medical tourism.

Making the announcement in a statement on March 29, the Special Adviser on Media and Publicity to the President, Femi Adesina, had disclosed that the President would be going for yet another routine medical check-up and a few days of rest.

“The President meets with Security Chiefs first in the morning, after which he embarks on the journey. He is due back in the country during the second week of April 2021.”

Like every other person, President Buhari is not super-human and can as well fall ill, but the import of this medical trip is not lost on Nigerians. It speaks to how the health sector in the country has been neglected for years, so much that government officials hop on the next flight to foreign countries to seek medical attention over every type of ailment.

In 2014, Buhari had, during a speech at the Chaltham House in London, promised that neither he nor any member of his government would waste tax-payers’ money to go seek medical attention outside the country but he has continued to break that promise by doing the exact opposite.

READ ALSO: QuickRead: Flying the Tinubu kite. Four other stories we tracked and why they matter

And, coming at time resident doctors in the country were threatening to go on strike due to several cases of broken promises by government, the trip is seen as insensitive and shows serious gaps in the President’s application of emotional intelligence as a leadership tool.

On March 29, the Chairman of the Code of Conduct Tribunal (CCT), Danladi Umar, became infamous when he took on a poor security personnel at the Banex Plaza in Wuse 2, Abuja, and rained several blows on the guy.

But for the incident being caught on video, Umar would have walked away with such an assault on an innocent citizen.

In an attempt to justify the actions of such a highly placed public official, Ibraheem Al-Hassan, the CCT spokesperson, in a badly written press release, filled with primary school boy errors, shifted the blames on the security guard, saying he was rude to Umar.

“Yesterday’s altercations started over a packing (sic) lot, which Chairman met vacant and it was directly opposite a shop he want to make a purchase and to fixe (sic) his phone, when the young security guard sighted him.

“He ordered that Chairman should not pack (sic) his car in that particular empty space, but Chairman asked why, the security guard couldn’t convinced (sic) chairman…. If Chairman had went (sic) there to cause trouble or intimidate someone, as suggested in the report, he would have gone there in his full official paraphernalia, but he went there alone with his younger brother.”

The import of the Umar incident is another indication on how public officers in Nigeria, maintained and serviced with tax-payers money, see themselves as lords over the very people they are meant to serve.

Typically, Umar showed crass contempt for the downtrodden in the society and even the half-hearted attempts by his spokesman to defend his actions further illustrate impunity in high places and mindless abuse of vulnerable Nigerians by the few that they elected to govern them.

By pushing the blame on the security guard and the ‘Biafra Boys’, Umar ended up betraying his innermost emotions, an ignoble weakness to stereotype people from some sections of the country, thereby stoking ethnic tensions and deepening the country’s fault lines.

On March 28, the Presidency, through the Special Adviser to President Buhari on Media and Publicity, Femi Adesina, accused former Vice President Atiku Abubakar, as being one of those who had contributed to the economic downturn in the country.

“I have never felt so bad at being proven right, as I am by the report from Bloomberg Business that Nigeria is to emerge as the nation with the highest unemployment rate on earth, at just over 33%.

“This government obviously lacks the capacity to address our current challenges, and we must help them, not because of the government, but because of our people,” Atiku had said.

But in a swift reaction during an interview on a Channels TV programme, Adesina accused Atiku as being one of those who put Nigeria in the situation it had found itself.

“Former Vice-President (Atiku) is part of the rot this country became. He cannot exculpate himself; he cannot sit in judgment over anybody. He played his part for eight years and they left the country where they left it,” he said.

The present administration has been in power for six years and, in all these years, has hardly acknowledged its own failings but constantly blamed past governments for the woes the country was passing through.

It seems to forget that Nigerians made a switch to the ruling All Progressives Congress (APC) because they got fed up with the failures and disappointments of the past governments, hoping that they, the new entrants, would right perceived wrongs.

The Buhari-led administration must be humble to accept its shortcomings, be honest to apply itself more diligently and offer Nigerians the transformational leadership they eagerly yearn for.

On April 1, the Nigerian Association of Resident Doctors (NARD) commenced an industrial action across the country following the expiration of an ultimatum the body issued to the Federal Government.

Speaking on the strike during an interview, the NARD President, Dr Uyilawa Okhuaihesuyi, said the industrial action would be sustained nationwide and that the body would never go back on it.

“We had a meeting with the Minister of Labour and we insisted that the implementation of what we wrote on the strike notice should be intimated immediately,” Okhuaihesuyi said.

The strike action embarked by the resident doctors is another dent on the image of the country’s battered health sector and the inability of government to rise up to its responsibilities.

The doctors complaints not only depict systemic rot but the pretentious disposition of government to dealing with the issues sustainably.

Or, how else could the unguarded utterances of the Minister of Labour, Dr Chris Ngige, be explained on his threat to sack striking doctors and recruit fresh ones to take their place? His hollow threats lose potency when the reality of insufficient doctors is placed on the table.

At his 69th birthday colloquium on March 29, former Lagos State Governor and National Leader of the ruling All Progressives Congress (APC), Bola Ahmed Tinubu, made a statement urging the Federal Government to employ 50 million Nigerian youths into the Nigerian Army and other security agencies in the country.

While Nigerians kept wondering how a whopping 50 million youths would be accommodated in the security apparatus in the country, his media aide, Tunde Rahman, came out the next day to clear the air, saying his principal actually wanted to say 50,000 instead of 50 million.

The statement issued by Rahman read:

“Asiwaju Tinubu canvassed the urgent need to combine employment and national security policy by the recruitment of 50,000 youths in all aspects of nation-building, ranging from infrastructural development to agricultural modernisation.

“Asiwaju seeks the expansion of security personnel by 50,000 for the armed forces not the 50 million that was mentioned in error. It was an accidental verbal mistake of which we all commit from time to time especially when reciting a series of large numerical figures.”

The supposed blunder and touted corrections from the Tinubu media camp show that nothing should be left to chance in reputation management.

While many believe such absent mindedness could happen to anyone, others think that the country’s leadership recruitment process must be taken very seriously.

And, for a political gladiator already positioning for the country’s highest office, it highlights the need for every of his statements to be carefully authored and measured.

To do otherwise would be to de-market him and show him as incapable, uninformed and not well primed for leadership ahead of the 2023 presidential election.

Imo attacks is what you get when Shehu Garba is now defacto president —Lawyer, Bamgbose