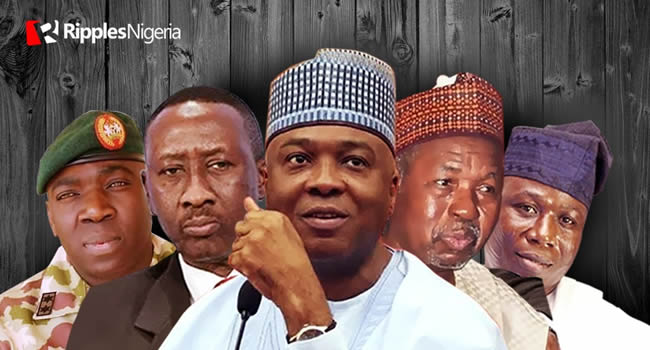 Former Senate President and stalwart of the Peoples Democratic Party (PDP), Bukola Saraki, made news headlines during the week in review when he made a passionate appeal to Nigerians to give the party another chance in the presidential election coming up in 2023.

The Chief of Army Staff (CoAS), Lt.-Gen. Ibrahim Attahiru, also made one of his routine promises of ending the Boko Haram insurgency, something Nigerians have heard time and time again but yet to see the effects of such vows.

We also tracked three other stories and do hope you will enjoy this offering.

On March 19, former Senate President, Bukola Saraki, begged Nigerians to give the Peoples Democratic Party (PDP) another chance to rule the country in the 2023 presidential election.

Saraki, who made the call while inaugurating some projects including schools and staff Quarters in Asaba, Delta State, said there would be a massive turnaround in the running of the country if the “PDP gets another chance to rule the country.”

“Our country is passing through some difficulties and I appeal to Nigerians to give PDP the chance again to lead Nigeria and you will see the difference,” Saraki said while making the passionate appeal.

Why it matters
Saraki’s invite asking Nigerians to give the PDP another chance at a bite of the cherry goes to show the level of desperation Nigerian politicians go to when they want to sway the electorates to vote for them.

The move presupposes that the average Nigerian voter can easily be swayed by an appeal to his or sentiments while ignoring pedigree and concrete performance as reliable measurements to enthroning credible leadership.

Saraki, by his moves, also reminds the country of a sickening culture of politicians using citizens as pawns in the political chess game.

It is arguable to think that the bulk of Nigerian electorates remain undiscerning and politically immature to fall for smooth-talking politicians whose principal drive is to grab power for the sake of it.

On March 14, the Chief of Army Staff, Lt.-Gen. Ibrahim Attahiru, told Nigerians that the end of Boko Haram insurgency and other incidents of insecurity in the country was in sight.

Attahiru made this promise while addressing troops of Sector 2 Command of Operation Lafiya Dole in Damaturu, Yobe State.

READ ALSO: QuickRead: Monguno’s shameless volte-face. Four other stories we tracked and why they matter

“I’m very pleased; your commanders have told me what you have done collectively, as part of ‘Operation ‘Tura Takai Bango’ and how you have pushed the Boko Haram insurgents.

“I am bringing very special greetings from the President and Commander-in-Chief; he has been fully briefed and is aware of what you are doing and how you are doing them.

“We are so proud of you and I believe that in the second phase of that operation, you will do more. I’m sure you will go out there and push the criminals so hard and bring this entire insurgency to an end.”

This is not the first time military authorities in the country have promised Nigerians that the end to insurgency is around the corner, yet insecurity continues to fester and escalate, spreading to almost every nook and cranny of the country.

In the past, Nigerians have heard how the insurgents had been technically defeated, seriously decimated and how their stronghold, the Sambisa Forest, had been cleared while the reality on ground suggests otherwise.

This new promise by Attahiru seems to fall flat as most Nigerians no longer trust the security agencies to take the fight to the insurgents, especially with the recent revelations by the National Security Adviser, Babagana Monguno, that the former Service Chiefs may have undone the country by mismanaging monies budgeted to prosecute the Boko Haram war.

As it stands, Nigerians have become fed up with these regular promises which, to many, are just to calm frayed nerves and give an impression that the military is on top of the situation.

On March 17, the Governor of Katsina State, Aminu Masari, gave reasons for the unabated invasion of the country by bandits from foreign countries like Mali, Chad, Eritrea and other countries in the Sahelian region of Africa, saying Nigeria is an attractive destination for the criminals.

Masari said the terrorists find Nigeria attractive because when the kidnap their victims, they get paid handsomely.
“There are kidnappers, there are bandits around but look at the whole world and look at the position of Nigeria in the Sahelian region. Are we not the richest?

“So, the attraction even for kidnappers to come to Nigeria is there. If you kidnap somebody in Mali, where are you going to get thousands? If I kidnap you in Nigeria, I get millions. So, all of us will have to rise to the occasion… they resort to high-profile kidnappings for money in cities and towns,” he said.

Why it matters
Governor Masari’s submissions that perpetrators of these crimes are mostly foreigners only point to one thing, and that is the fact that the government knows where they come from.

If his argument is sustained, it would then suggest that the government, of which he is part of, has failed woefully to deliver on its primary responsibility of protecting lives and property.

His submissions are, therefore, simplistic to the extent that he ignores how government has failed to secure the country’s borders, and is encouraging amnesty for the so-called repentant bandits who may, indeed, be foreigners.

Monguno made the call at the third quarterly meeting of Secretaries of State Governments (SSGs) held in Abuja, saying states could improve their security situations through better training and funding, adding that there is the need for state governments to engage community leaders to enhance intelligence gathering.

“Right now, security agencies do not work together as closely as expected. We have been trying to ensure unity of purpose and unity of operation.

“Whether we like it or not, in Nigeria, we fundamentally rely on traditional institutions. They are essential to security and if they do not carry the kind of authority they ought to, we cannot recalibrate the entire political structure.

“Leave out our traditional rulers, you will begin to see all kinds of leaders of various sects filling the vacuum because their traditional rulers have been taken away from what they are supposed to do and coordinate,” Monguno said.

Why it matters
Maj. Gen. Monguno’s statement points at one thing: that governments at various levels have failed in providing security for Nigerians as many of them have shirked in their core duties which are to protect lives and properties of citizens.

Given that the Police, Army and other security apparati are only answerable to the Commander-In-Chief and not to the state governors, the import of Monguno’s statement is a clear indication that the government has become desperate and is seeking to grasp at straws in the fight against insecurity in the country.

This brings to fore the increasing clamour for state police. But as many have feared, there is an evident lack of political will and sincerity of purpose to execute the plans, especially over concerns that State governors may abuse the process.

On March 18, the Arewa Youth Assembly (AYA) issued a three-day ultimatum to Yorubas residing in the North to leave the region or be forced out.

The call came following a statement by self-styled Yoruba activist and freedom fighter, Sunday Igboho, who declared an Oduduwa Republic, and insisted that Yorubas will no longer accommodate and accept the presence of criminal Northerners on their land.

In a statement signed by AYA Speaker, Mohammed Salihu Danlami, the group said:
“We are hereby giving him the ultimatum of 72 hours to move his people out or we will be forced to take necessary actions by personally taking the responsibility of getting his people back home.
“Since it is Igboho who wants his people out of the North to form a Yoruba nation, we will make it easy for him by asking Mr. Igboho to provide a means of transportation to convey his people to the southwest.”

Why it matters
The import of the ultimatum given to the Yorubas by the Arewa Youth Assembly finds expression in the widening fault lines in the country, engendered principally by a stoking of ethnic and religious sentiments due to a failure of leadership.

Needless to say that a growing loss of confidence in the Nigerian project, quickened by the emergence of regional warlords spells doom and a descent into a failed state.

As long as a crisis of leadership confronts Nigeria, so long will the likes of Igboho and Danlami rise to fill the gaps created by a poverty of leadership.

ORTOM: Citizens may be forced to ‘resort to self help’ — David Mark