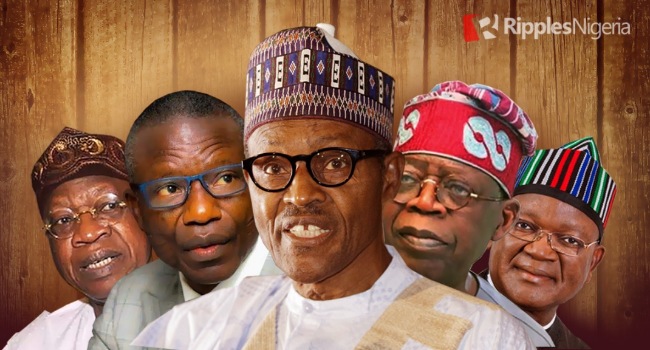 During the week, a group sneaked in to tout a list of candidates considered eminently qualified to succeed President Muhammadu Buhari in 2023. Standing out was the name of Senator Bola Ahmed Tinubu, acclaimed National Leader of APC.

In the same period, the presidency boasted that the administration of President Muhammadu Buhari was the best Nigeria has ever had despite the economic hardship and the insecurity situation bedeviling the country.

A related posture was maintained by the Minister of Information, Lai Mohammed, who criticised the opposition for allegedly taking advantage of the country’s challenges to wage a war against the Federal Government.

We also tracked two other stories that kept the polity abuzz and we do hope they make your weekend.

On March 25, a Northern group, the Arewa Mandate Initiative (AMI) expressed its support for the return of power to the Southern part of the country in 2023 and listed former Governor of Lagos State and acclaimed National Leader of the All Progressives Congress (APC), Asiwaju Bola Ahmed Tinubu, as one of its preferred candidates.

In a statement issued by the duo of Muhammed Mubarak and Aminu Mohammed, its Coordinators in the Federal Capital Territory (FCT) and Sokoto respectively, the group said its decision was in line with the gentleman agreement reached by leaders of the APC at its formative stage in 2014.

“The AMI, in furtherance of the search for a president from the South that could match the pedigree and patriotic credentials of President Muhammadu Buhari, has beamed its searchlights on some individuals that may be the choice acceptable across the board, for the North and South including names like Asiwaju Ahmed Bola Tinubu, Minister of works Raji Fashola, Governor of Ekiti, John Kayode Fayemi, and Minister of Interior, Rauf Aregbeshola,” the group said.

The rash of seemingly coordinated events intended to position Bola Ahmed Tinubu as a popular candidate in the run up to the 2023 presidential poll removes the veil on his unspoken political goals.

There may have been other names touted but it is clear that Tinubu has the strongest pedigree of them all.

His determined efforts to cultivate other sections of the country is enough to tell even the uninitiated or political neophyte that the acclaimed National Leader is ready and willing to throw his hat in the ring.

From Katsina, where he went and shelled out N50million to support victims of a fire disaster, to Kaduna, where he was recently nominated to give the keynote address as the chairman of the 2021 Sardauna Memorial Lecture at the Arewa House 11th Annual Lecture, it is clear that it would take more than blackmails and intimidation to discourage Tinubu from battling for APC’s ticket in the much anticipated 2023 presidential election.

Senior Special Assistant to the President on Media and Publicity, Garba Shehu, on March 26, boasted that President Muhammadu Buhari operates the best democratic government in the history of the country.

Garba, who spoke as a guest on Channels Televion, trumpeted what he considered some undeniable achievements and went on to position the administration as the best thing that ever happened to the country.

“People should be free to say whatever because this country is under the best democratic government that we have had since the fourth republic.

The metric towards determining the impact of any particular government is decided by feeling the pulse of the populace regarding the provision of the basic dividends such as security, education, infrastructure et al.

On these fronts, there is an overwhelming feeling that the Muhammadu Buhari-led administration has not acquitted itself well.

The disposition of the Presidency amounts, therefore, to listening to itself and conducting a dialogue of the deaf.

As it stands, no amount of self pity by the Presidency can detract from the objective conditions that daily confront Nigerians.

Buhari and his team may continue to launder a battered image but cannot wash itself clean until citizens begin to return positive testimonials in favour of government impact in their lives.

Minister of Information and Culture, Alhaji Lai Mohammed, on March 24, rejected outright the assessment of the President Buhari administration by the Civil Society Legislative Advocacy Centre (CISLAC) on the lack of transparency in the recovery of looted assets.

“I think that I’m aware of that particular rating which was not quite flattering to Nigeria, but our position, which I’ve declared before, is that that rating does not truly reflect the great strides that the administration has made in the area of fighting corruption.

“The government has put in place various reforms in fighting corruption, but some of these reforms will take time to yield the desired results because the matrix used by TI is not just about grafts alone,” he had said.

It is no brainer to understand why Lai Mohammed will quarrel with data laid out by independent agencies on the performance of the ruling All Progressives Party (APC). He is paid to do so!

In rejecting constructive criticisms, the government makes the mistakes of refusing to look in the mirror and come to terms with some of the sickening reflections of its own image.

Lai’s disposition, therefore, tallies as an attack on the sensibilities of most Nigerians as verifiable facts show the economy is on a free fall, insecurity is a serious call for concern while a majority of Nigerians are reeling in abject poverty.

The image in the mirror is not convincing enough for most Nigerians to join government spokesmen in celebration of tarred beauty.

On March 20, the Governor of Benue State, Samuel Ortom, was the target of attack by ‘unknown gunmen’ when his convoy came under heavy gunfire on the way to his farm at Tyo Mu along Makurdi/Gboko road in Makurdi local Government Area of the state.

Abraham Kwanghngu, an aide, had said: “The governor and I along with few security details parked our vehicles by the highway and walked for about 2 kilometres to his farm by the river bank. We were our way back to our vehicles when we suddenly ran into an ambush mounted by well-armed suspected militia all dressed in black who opened fire on us.
“His Excellency and I had to run through the rough terrain for about a kilometre and a half at times crawling to avoid the showers of bullets fired at us by the gunmen.”

Ortom’s experience speaks to the full democratization of insecurity in the country as governors, with their retinue of security details, and the humongous amounts they collect, become susceptible and vulnerable to attacks by deviants.

A few months ago, Borno Governor Babagana Zulum was the target and was attacked on more than three occasions and if governors have thus become helpless, then the masses have become sitting ducks.

And unless the security architecture is rejigged, the country may have to brace up for more spells of disaster.

On March 25, the Pentecostal Fellowship of Nigeria (PFN) called on President Buhari to speak up on the worsening insecurity in the country.

PFN President of PFN, Bishop Wale Oke, while receiving presidents of PFN chapters from Lagos, Ogun and Osun States, in Ibadan, said:
“The silence of President Muhammadu Buhari over the degenerating security situation in Nigeria is too loud and this is very disturbing.
“Seriously, President Buhari’s silence is deafening and it’s giving room for speculations and gossips that suggest the government has a hand in the sickening situation by indulging and pampering the bandits and the killer Fulani herdsmen, among others.”

The issues raised by Christain leaders heighten the frustrations over security concerns and the seeming indolence of the administration in tackling the menace.

The outcry also lends credence to speculations that the President may not be seriously bothered because of geo-political considerations which further deepen the fault lines in the country.

If anything, the President’s perceived loud silence will continue to generate greater uproars and grow the community of critics who believe that the country is heading towards a failed state.