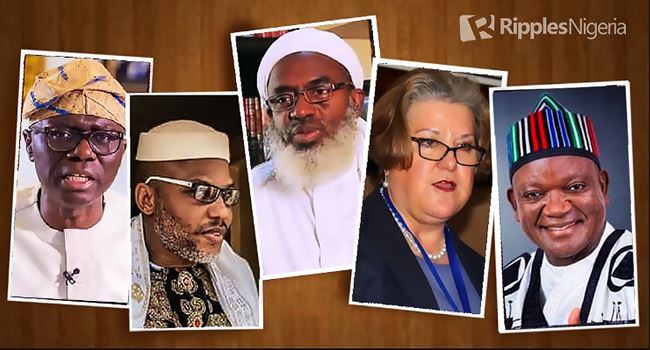 A switch in IPOB’s tough stance on a sit-at-home order in the South-East was, perhaps, the biggest story in Nigeria’s political space last week. Originally designed to run from November 5 to November 10, the directive was called off last Thursday.

There had been strong concerns that the botched order would have had serious consequences for the Anambra governorship poll earlier slated for November, 6.

The Indigenous People of Biafra (IPOB) on November 4 withdrew the sit-at-home order in the South-East. The group cancelled the order just two days before the Anambra State governorship election which held on Saturday.

In a statement issued by its spokesman, Emma Powerful, IPOB said, among others: “Following the genuine intervention of our elders, esteemed traditional Institutions /Rulers and religious leaders, and after due consideration of the positive impacts of their engagement, the leadership of IPOB ably lead by Mazi Nnamdi Kanu hereby and immediately CALL OFF THE ONE WEEK SIT AT HOME earlier declared to commence on November 5 to November 10, 2021.”

The withdrawal of the group’s sit-at-home order, ostensibly after wide consultations and engagements, sheds light on the impact of dialogue in the resolution of conflicts.

Indeed, it means that contestations for power at all levels can be resolved if opposing forces shelve violence for genuine conversations.

For the South-East region, it brings temporary reprieve from weeks of economic lockdown while it offers the Nigerian government a window to leverage in the quest for a political solution to the conflict.

2, US warning on Anambra poll

The United States on November 3 threatened to impose visa restrictions and other sanctions on any individual inciting violence during the Anambra State governorship election.

In a statement issued by the US Embassy in Abuja, Washington said, among other: “The United States looks forward to a gubernatorial election in Anambra State on November 6 that is peaceful and transparent, with results that accurately reflect the will of the state’s residents.”

US government concerns are a fair attempt at ensuring that the democratic culture is deeply engrained in the country while the institutions of democracy are also strengthened.

The subtle threats, no doubt, will go a long way to check malpractices in Nigeria’s electoral processes and guarantee the integrity of present and future elections.

The Middle Belt Bishops Council (MBBC) on November 3 canvassed for the region to produce the country’s President in 2023.

A member of MBBC, Bishop Edward William, who stated this in a chat with journalists, added that the lack of presidential candidates from the Middle Belt showed that people from the region were“treated as second or third class citizens” by the rest of the country.

Read also: QuickRead: Afenifere’s demands. Four other stories we tracked and why they matter

He said: “We in the Middle Belt are tired of being mere passengers and onlookers in this vehicle called Nigeria.

The Bishops’ demand, again, draws attention to the unresolved issue of perceived marginalization by some federating units and the rising clamour for justice, equity and fairness in the distribution of political offices in the country.

It also highlights the place of primordial sentiments in Nigeria’s leadership recruitment process where merit has been jettisoned for other considerations with limited or narrow outlooks or scope.

The controversial Islamic cleric, Sheikh Ahmad Gumi, on November 2 called for a blanket amnesty for bandits wreaking havoc in the North-West.

Gumi, who made the call during the enrolment of students into the free healthcare and education support programme in Kaduna, said: “If there is anything that can stop the shedding of blood, it is better just like what happened with the Niger Delta militants. They were shedding blood and vandalising pipelines until they were given an amnesty by the government.”

Gumi’s unfettered access to bandits, his clamour for amnesty for them, and federal government’s seeming unwillingness to leverage the network to decisively deal with the crisis, somewhat exposes the insincerity of the ruling elites.

If anything, it highlights government’s hypocrisy in pretending to be hamstrung when an ordinary citizen like Gumi has served clear notice that he understands the operational mode of the bandits and how to reach them.

In equating criminality with a genuine struggle for liberty, Gumi shows a narrow appreciation of the relevant issues or is simply playing the devil’s advocate by trivializing a rather serious challenge to the Nigerian state.

On November 1, a 21-storey building in Ikoyi, Lagos, came crashing down with over 40 persons pronounced dead, including the property owner, Femi Osibona.

The Lagos State Governor, Babajide Sanwo-Olu, in setting up a panel to probe the building collapse said:
“The inauguration of this panel shows sincerely that the state government is interested in unravelling and getting to the root cause of what happened to the building, so that everyone concerned, including the government, will learn from the very unfortunate incident.
“Lagosians and the world will be watching and waiting keenly, with the full expectation that the immediate and remote causes of this tragedy will be uncovered.”

This unfortunate incident reinforces the call for the government at all levels to strictly enforce the regulations guiding building construction in Nigeria.

It also strengthens the advocacy for the passage of the National Building Code by the National Assembly because the absence of this document has been largely responsible for the incessant incidence of building collapse across the country.

Beyond the rhetoric that has trailed the incident, the government and stakeholders in the construction/real estate industry need to work together to address the rot, including the use of quacks and low quality materials that pervades the system.

QuickRead: Femi Adesina and the running bandits. Four other stories we tracked and why they matter

QuickRead: Afenifere’s demands. Four other stories we tracked and why they matter