QuickRead: Obasanjo’s admonitions, Buratai’s assurances. Three other stories we tracked and why they matter | Ripples Nigeria 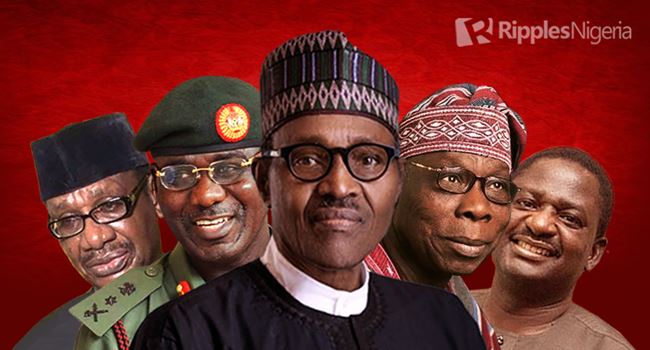 Year 2020 breasted the finishing line with some interesting political developments. In this QuickRead, we review former President Olusegun Obasanjo’s admonitions to Nigerians to stop blaming God for their many woes, and the boast by Army Chief, Tukur Buratai, that the military will shame and disgrace terrorists in the North-East in 2021.

Three other political events also caught our attention. Like always, we examine their implications for our polity.

The former leader speaking at a forum held at the Olusegun Obasanjo Presidential Library in Abeokuta had said, “We do not have to blame God for our situation, we have to blame ourselves. Nigeria does not suppose to have these challenges or be poor. No Nigerian must go to bed hungry. That we have a situation like that is a choice by our leaders and followers alike. My prayer is that God will make the year 2021 a better year for all of us, but it will not happen without work.”

Obasanjo’s admonitions hit at the core of ‘the trouble with Nigeria’, the poverty of leadership, an issue the celebrated novelist, Chinua Achebe, once raised in his several essays.

It speaks to a culture of surrender to mental laziness that makes both the leader and the led to grope in the wild when the application of knowledge is all that is required to engender a solution.

Obasanjo unwittingly reminds us too that he may have been part of the problem having held the reins of power and failing to lay the foundations for the emergence of a strong, prosperous and sustainable economy.

A major takeaway from the Obasanjo preachment is that no amount of supplications to a higher being can move the country away from its prostrate state without a deliberate and strategic plan to enhance productivity. We agree!

The Chief of Army Staff, Lt. Gen. Tukur Buratai, on Thursday, December 31, 2020, assured Nigerians that the army would shame and disgrace Boko Haram and the Islamic States for West African Province (ISWAP) terrorists in 2021.

Speaking at a sit-out night to usher in the 2021 New Year at the TY Buratai Institute for War and Peace, in Biu Local Government Area of Borno State, Buratai said:
“2021 will be very optimistic, totally different with a remarkable difference from 2020. You should go into the year with full conviction that we can do better to address the insecurity in our country.”

Buratai’s assurances only serve to renew hope and, perhaps, help boost the sinking morale of soldiers.

Beyond this, the objective conditions and the tardiness that has attended the war efforts leave a lot to be desired. They do not rekindle faith in the country’s security architecture.

If anything, Nigerians think that the military chiefs have given their best and that it is time to quit honourably.

The Special Adviser to President Muhammadu Buhari on Media and Publicity, Femi Adesina, on Friday, January 1, 2021, asked Nigerians he described as “wailing wailers” to calm down in the New Year.

“There is hunger, lack of jobs and insecurity in the country but wailers should be calming down this year,” he said.

He added, “2021 is the year of work. Hard work, to deliver on the major projects by next year. Is it then a year to continue wailing? No. It is the year to calm down. A year for wailing wailers to find a vocation, and allow the government to concentrate, and deliver on projects at hand.

Adesina’s indiscretions, especially in the choice of language, smacks of arrogance and disdain for the populace.

To make light of a very serious situation is blatantly insensitive.

It also interrogates his capacity, competencies and level of professionalism in the discharge of his duties.

Except the intention was to brow-beat citizens into docility, Adesina’s reputation management approach does his principal little or no good, and that is if the presidency really cares about a systematic response to its image challenges.

President Muhammadu Buhari on Friday, January 1, 2021, found justifications for why his government failed to deliver on expectations in the Year 2020, saying that the year was his most strenuous year with so many challenges.

Buhari, who stated this in his 2021 New Year Broadcast to the nation, “We especially thank God because the year 2020 was one of the most trying years since our existence as a nation. This can also be said about all other nations around the world, due to the challenges posed on our collective humanity by the novel COVID-19 pandemic.

“While acknowledging that 2020 was a very tough year, we saw this year put to test our national resilience and ability to survive these tough times and also gave renewed hope that we will again brave any storms that lay ahead in 2021 and beyond.”

Buhari may be more than justified in his assessment of year 2020 outcomes. The coronavirus pandemic caused immeasurable dislocations in the global system, with supply chain disruptions that brought countries to their knees.

On the other hand, it exposed the vulnerability of the Nigerian state in terms of its capacity to manage crisis.

The Buhari-led administration, given its response strategies, was a show of disaster; ranging from lack of innovation to poor management of its own palliative measures.

It’s many unforced errors clearly indicate that it was short on creativity while exhibiting traits of a poor student of history for its handling of security concerns and the EndSARS uprising.

The Chairman of the Presidential Advisory Committee Against Corruption (PACAC), Professor Itse Sagay (SAN), on Wednesday, December 30, 2020, called on President Muhammadu Buhari and the Inspector General of Police, Mohammed Adamu, to allow Nigerians to carry weapons to protect themselves against unprovoked attacks.

Sagay said, “The country has become so dangerous…What I will like to suggest to the government is that it should allow ordinary Nigerians to carry arms. Everybody who wants to bear arms as a form of self-defence should be allowed to do so. This is necessary so that when these bandits and miscreants attack them, they will know that the person they attacked can defend himself.

“All these restrictions on owning weapons should be lifted. Let the public be allowed to own weapons, especially in all those villages where they are being massacred.”

The advice by Sagay further shows how desperate Nigerians have become in search of an immediate solution to the worsening insecurity in the country.

The call for self-help, which continues to gather momentum, is also a clear pointer of the frustration of the citizens over the glaring failure of the Nigerian state to deliver on its primary function of protecting lives and properties.

As persuasive as the arguments are, and with a distrust for government’s capacity to shield citizens from bandits and terrorists, the country may just prepare for a surge in arms build-up which could portend more danger than a solution.

The irresponsible conduct of politicians who arm poor and frustrated Nigerians for political and other nefarious reasons speaks to this concern.