QuickRead: Sani’s ‘friendly’ advice to Tinubu. Four other stories we tracked and why they matter | Ripples Nigeria 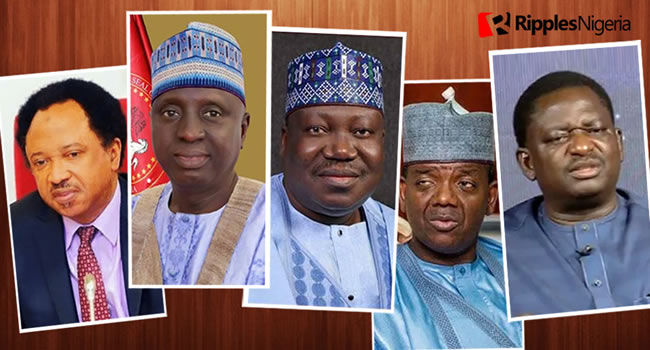 During the week in review, former Senator Shehu Sani sent a ‘friendly’ advice to former Lagos State Governor and National Leader of the All Progressives Congress (APC), Asiwaju Bola Tinubu, to be wary of Northerners who have been hailing his perceived 2023 presidential ambition.

Also, Special Adviser to the President on Media and Publicity, Femi Adesina, took a swipe at those who have been condemning President Muhammadu Buhari, saying those who consistently criticize the President have achieved nothing in their lives and cannot even manage their ‘riotous homes’, yet come out in the open to condemn his principal.

We also tracked three other stories for your digest.

On April 5, former Senator Shehu Sani, gave a very down to earth piece of advice to former Lagos State Governor and National Leader of the All Progressive Congress (APC), Bola Tinubu, to be careful in dealing with northern elites whom he termed as hypocrites that would pull him down in his presidential ambition.

Speaking in Osogbo, the capital of Osun State, Sani said the northern elites who seem to celebrate Tinubu now would still be the same people who will drag him down when the chips were down.

“What I am trying to say is that as he is allegedly moving towards contesting for the presidency, he should try to know the actual feeling on the ground as far as North is concerned because I know what Abiola went through.
“They (northerners) conspired against Abiola and sabotaged him and at the end of the day, he had gone,” Sani said.

Why it matters
Shehu Sani’s remarks further buttress the nature and character of Nigerian politics where permutations are often times not based on character, capacity and competence but such mundane qualities as tribe, ethnicity or religion.

The veiled import of Sani’s message is that Nigeria’s politics continues to be defined by unwelcome intrigues and that despite their outward show of support to Tinubu, northern power brokers may dump him once his perceived usefulness is fully tapped like they did to Moshood Abiola in the 1992 presidential elections.

What this portends to the leadership of the country, therefore , is that its leadership recruitment process remains very flawed and not ready for a merit based system.

On April 9, Special Adviser to the President on Media and Publicity, Femi Adesina, was all offensive as he once again tried to defend his principal, President Muhammadu Buhari.

In an article tagged ‘Nigeria and the war of Tongues’, Adesina showed his acidic scholarly prowess when he attacked those condemning Buhari, saying, among others:

“You find all sorts of commentators in the media condemning everything and everybody, but themselves. In their lives, they have probably never been a class monitor, not to talk of school prefect.
“They can’t even run their riotous homes, with obstreperous children and wards, yet they come out to abuse the President daily. Ask them what they have achieved in life, compared to that of the President, and they are blank,” he wrote.

READ ALSO: QuickRead: Buhari’s 12th London trip for medicals. Four other stories we tracked and why they matter

Why it matters
Adesina’s vituperations and attacks query the readiness of the Buhari-led administration for constructive criticisms and engagements.

This disposition is made worse by its usually hurried move to discountenance the place of democracy in the country’s national life.

It might not be totally out of place to speculate that the future may portend a descent into authoritarian rule if the government takes delight in intimidating, blackmailing citizens and muzzling free speech.

On April 3, Senate President, Ahmad Lawan, said Nigerian elites were behind several calls for cessation and spearheading agitations for the breakup of Nigeria.

Why it matters
Ahmad Lawan once again played the game the present administration is known to play at all times; shifting the blames from issues bothering the nation to perceived enemies of the country and President Buhari.

In claiming that the unity of the country is non-negotiable, the present administration, again, true to character, shuts the door to genuine and honest conversations around the burning issues of insecurity, endemic poverty and perceived marginalization by some sections of the country.

On April 9, the Chairman, Senate Committee on Health, Senator Ibrahim Oloriegbe, made what many believed to be a careless statement when he said “any soul that dies as a result of the NARD’s strike is in the hands of the doctors.”

Speaking at the public hearing of the Establishment Bill 2021 for the ‘Federal Medical Centre, Mubi, Adamawa State, in Abuja, Oloriegbe said, among others:
“I’m a doctor myself. We took an oath to serve and save lives. On no circumstances should we, through our action, endanger any life to be lost due to our personal interests.
“We know as doctors, we have to take care of our welfare, but we’ve taken an oath to serve. Any soul that dies as a result of the strike is in the hands of the doctors,” he said.

Why it matters
Senator Oloriegbe’s unfortunate statement is symbolic of the often discredited high-handed approach by Nigerian government to dealing with industrial relations matters in the public service.

Oloriegbe’s stance can only serve to deepen existing mutual suspicions and hurt the long term search for sustainable solutions within Nigeria’s health sector.

Also on April 9, the Governor of Zamfara State, Bello Matawalle, warned those protesting against President Muhammadu Buhari’s medical vacation in the United Kingdom to desist as it was an attack on the North and would not be tolerated.

In a statement he personally signed, Matawalle said the protesters were sponsored by enemies and haters of Buhari.
“As a Northerner, I condemn in the strongest term, how, in the same manner of hatred, President Muhammadu Buhari was treated by so-called protesters that could not hide their disdain and hatred for the North.

“Their action, no matter their grievances, is uncivilised, highly irresponsible, unpatriotic and disrespectful to the person and office of the President and has demonstrated the growing hatred against anything North.

“For the North to survive and defend its interests, our leaders MUST have the courage to always speak out against such aggression and to protect Northern interests, the way our contemporaries in the South often do, even when there is no justification to do so.”

Why it matters
Governor Bello Matawalle, by his outbursts, has subtly posited that they, the north, own President Buhari, which further highlights the inherent fault lines in the society and elevates clannishness.

By conveniently forgetting that Buhari was elected into his position by majority Nigerians across tribes and religion, Matawalle sends a clear signal, even from the eyes of a leader, that the country is far from being United.

It is left to be seen how the loose remarks of a man, as high up as a governor, will help build a sense of belonging and concretize the country’s search for unity.

QuickRead: APC’s rocking boat. Four other stories we tracked and why they matter

QuickRead: Buhari’s 12th London trip for medicals. Four other stories we tracked and why they matter