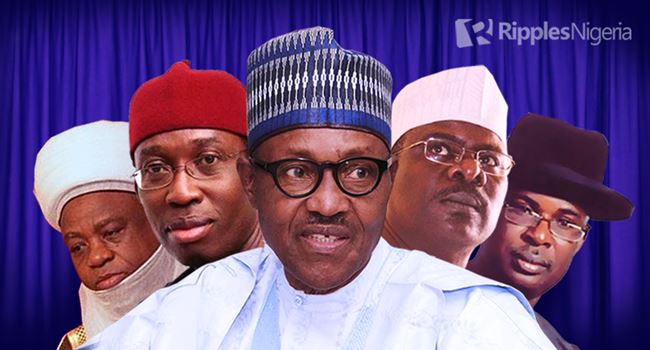 We combed Nigeria’s political space for some juicy stories last week, and here are our top picks.

First, were the loud cries by the Sultan of Sokoto, Alhaji Sa’ad Abubakar, lamenting how the north has become the worst place to live, and secondly, the ranting by Minister of State for Petroleum Resources, Timipre Sylva, over why the Muhammadu Buhari-led administration should be celebrated for importing fuel from Niger Republic.

These and three other interesting political events enjoyed prominence. As usual, we examine their implications for national development.

The Sultan of Sokoto, Alhaji Sa’ad Abubakar, on Thursday, November 26, lamented that the northern region of Nigeria had become the worst place to live in the country due to worsening insecurity.

Speaking at the fourth quarterly meeting of Nigeria Inter-Religious Council in Abuja, the Sultan said:

“People think the North is safe but that assumption is not true. In fact, it’s the worst place to be in this country because bandits go around in the villages, households and markets with their AK 47 and nobody is challenging them.”

The Sultan’s loud cries put the seal on any propaganda weaved by the Nigerian government to cover up the near state of anarchy in the northern parts of the country. His tears also paint a rather ironic scenario of a country where security operatives pull the trigger on unarmed citizens but are unable to curtail the activities of real criminals.

If the Sultan is to be believed, it means that the country’s security architecture, if any exists, has collapsed, and that the Nigerian leadership has failed woefully to deliver on the primary expectations of citizens, which is protection of lives and properties.

Indeed, the outpouring of emotions by the Sultan should raise serious concerns over what has become of the humongous sums of money sunk into the prosecution of the war against terrorism and, perhaps, lead to an honest inquiry of the state of fitness of the Nigerian military.

Will the Buhari leadership fathom a new way out of the impending state of anarchy? If it fails, then it should expect that the rising clamour for devolution of powers and decentralization of the Nigeria Police will reach a crescendo.

The Minister of State for Petroleum Resources, Timipre Sylva, on Monday, November 23, said that Nigerians, rather than complain, should be proud that the Nigerian Government was set to resume the importation of petroleum products from neighbouring Niger Republic.

Sylva had said, “I don’t see that (importing petroleum products from Niger) as an embarrassment at all. As a country, Nigeria is a big market, we need products, even if all our refineries were functioning, we will still need extra products.”

Sylva’s claim should be seen as an unwholesome spin intended to pull wool over the eyes of unsuspecting Nigerians.

The revelation about government plans to import petroleum products from neighbouring Niger, a non-oil producer, depicts the very low level of how Nigeria has descended into economic ruin.

That the Nigerian leadership thinks that the citizens should celebrate their tardy performance speaks to lack of shame and reign of mediocrity.

The Minister’s rantings, which came after his claim that most beneficiaries of petroleum subsidy are the elites, further show how disconnected, and far removed, the government is from the ordinary folks.

President Buhari on Tuesday, November 24, yet again, looked for some extraneous reasons to explain the debilitating state of insecurity in Nigeria and some other West African countries. This time, he blamed mercenaries out of Libya for the worsening security menace in the region.

Buhari, who spoke when he received a special envoy from Chad at the State House in Abuja, said upon the death of Gaddafi, the “mercenaries became scattered and spread out into the Sahel region, causing insecurity and chaos wherever they found themselves.”

The degeneration to militancy and war, no doubt, reflects the rise of resistance to injustice and oppression in most West African societies.

However, while Buhari’s Libya analysis could be right, the insecurity ravaging the region is a clear sign of failure of leadership.

As terrorism takes on a global posture, an ideal response would most probably lie in an effective multilateral arrangement that would seek to contain its spread across borders.

Ultimately, a more sustainable response would require the institutionalization of good governance, transparency and accountability in the management of the resources of these troubled states.

Identifying the challenges, as Buhari did, will amount to mere academics except Nigeria leads by example.

The governors of the South-South and leaders of the region on Tuesday, November 24, reiterated the need for Nigeria to be restructured. They spoke at Government House, Port Harcourt, Rivers State.

The Chairman of South-South Governors Forum, Ifeanyi Okowa, who presented the demand during a consultative meeting with a Federal Government delegation in Rivers State had said: “For us in the South-South, the #ENDSARS protest is a metaphor of almost all that is wrong with us, our refusal to properly understand issues, and imbibe and entrench the virtues of justice, fairness and equity.

“The previous system of true federalism was jettisoned and it created a powerful center controlling and distributing all the resources unevenly. There was now a strong desire to restructure the country in order to guarantee peace, security, stability and progress of the nation.”

The demand by the South-South leaders further deepens the fault lines in the country, and the unwillingness by the political leadership to allow for meaningful dialogue is capable of stoking more tension and may create the basis for an implosion.

But beyond the political games, it is easy to discern that Nigerian politicians seem to have perfected the art of playing ethnic and religious cards to keep the citizens perpetually distracted while using them as pawns in the political chess board.

As long as this persists, the country’s search for enduring peace and stability might well be a mirage.

The Chairman of the Senate Committee on the Army, Ali Ndume, on Monday, November 23, got a taste of life behind bars following Justice Okon Abang’s order that saw him remanded in prison custody for failing to produce the defunct Pension Reformed Taskforce Team Chairman, Abdulrasheed Maina, in court in alleged N2.2 billion fraud trial.

Abang, while ordering Ndume to be remanded in prison, said that the senator failed “to file a formal application to explain why he should not forfeit the N500million bail bond he deposed to on May 5 to stand as surety for Maina.”

Ndume, however, was granted bail on Friday, November 27, after spending five days at the Kuje Correctional Centre, Abuja.

The order by Justice Okon Abang is a reassuring signal that the law is no respecter of persons, and that the wheel of justice grinds slowly.

Indeed, it comes as a warning that the long arms of the law, as it is often said, will catch up with anyone who violates laid down rules and regulations.

Finally, if politics is not the driving motive for the renewed battle to bring Abdulrasheed Maina to justice, then it must be said that the judiciary may have found its lost voice.