R-APC to APC: Your begging is coming rather too late, the train has left the station 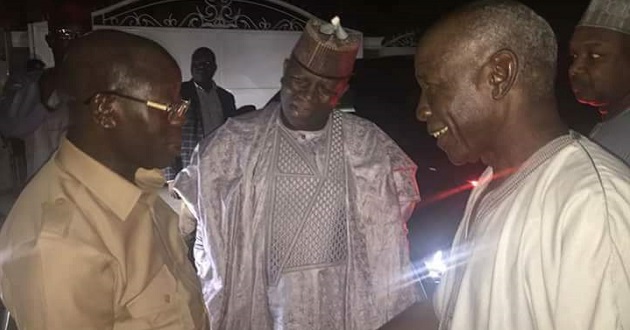 The APC faction said that despite the recent consultations and promise of juicy carrots to R-APC members by President Muhammadu Buhari and the leadership of the APC that it was already too late to stop the R-APC from its planned defection.

R-APC stated this on Sunday in a statement by its national publicity secretary, Kassim Afegbua.

The statement came on the heels of the perceived high powered consultation Buhari and the APC leadership have been having with some leaders of the R-APC.

A monitored report had claimed that the APC during a meeting last week with R-APC senators and members of the House of Representatives, had begged them to jettison plans of dumping APC and promised them automatic tickets to contest the 2019 elections.

Also last Thursday, President Buhari was said to have during a closed door meeting with Senate President Bukola Saraki, at the Presidential Villa, pleaded with him not to leave the APC, assuring him of retaining the Senate presidency in 2019.

But in its statement on Sunday, R-APC described the APC as a double standard party, adding that the Buhari administration was never a promise keeper as it had not fulfilled what it promised Nigerians during the electioneering in 2014 and 2015.

“We members of the R-APC, find it very amusing that those who boasted that they won’t lose sleep over our altruistic action, have been hopping from door to door pleading with our members not to leave by dangling juicy carrots and promising them heaven and earth.

“Such level of double standard is the reason why the R-APC was birthed in the first place because the leadership is not one that keeps promises and it’s the reason why no one should take the APC seriously.”

On President’s meeting with Saraki and alleged promise of mouth-watering offers to the Senate President, R-APC wondered how Buhari finally is wooing, “the same leader who was ridiculed, scandalised, demonised, criminalised and called all sorts of names by agents of the Presidency just to give the Senate President a bad name in order to hang him.”

It said, “As soon as the Supreme Court gave a resounding verdict on the trumped up and frivolous charges against the Senate President, Mr. President suddenly felt a need to praise the judiciary for standing on its own. Power as they truly say, must be a crazy aphrodisiac.”

It noted that never had any number three citizen of Nigeria been so dehumanised, criminalised and disgraced while those who just started reconciliation “kept conspiratorial silence, waiting for the sledge hammer to fall on the Senate President.”

R-APC further said, “They were short of calling him a promoter of armed robbery. They linked his name to the Offa Robbery and improvised all bile to rubbish the institution of the legislature.

“They stripped him naked in the marketplace and now desperately trying to bath him with ornaments in the inner fortress of Aso Rock.”

It said after the Supreme Court in a landmark judgment gave Saraki a clean bill of health, “All the political conspirators in the APC swooped into dubious reconciliation assignment, hopping from door to door at the thick of the night to strike deals of reconciliation. Those who said they won’t lose sleep over the R-APC have become sleepless in the last two weeks”.

On APC and its promises, R-APC said, “This government is never a promise keeper and some of the promises contained in the manifestos of the APC have been jettisoned .

“The President, who has held himself in the inner sanctuary of the Presidential Villa is all of a sudden, opening his doors to one meeting or the other all in the name of re-election.

“Just to make the point that it is too late in the day; the train has left the station. Leopards cannot change their spots no matter how much one tries to tame them.

“This democracy must survive on ethical grounds and not on lawlessness and exclusion. It must provide a level playing field for all participants. Those who prevented some persons from visiting their states in the name of politics have suddenly realised that they need the services and support of those persons .

“They are now pleading; ready to submit to all demands. Who does not know that won’t work because examples have shown that political agreements are often observed in the breach.”