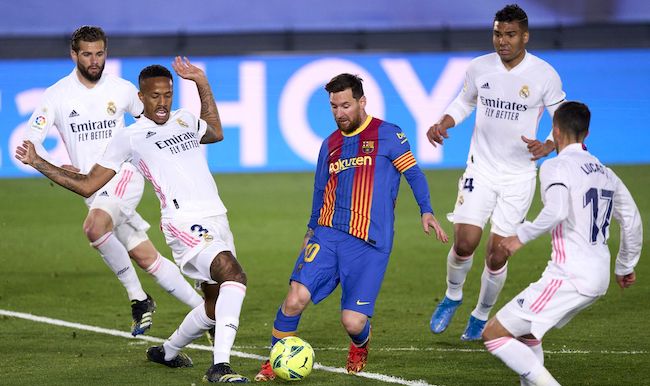 The 13-time European champions had also defeated their biggest rivals 3-1 in the reverse fixture last November.

Zinedine Zidane‘s men were in need of a positive result against Barcelona in the Spanish capital to narrow the gap between the two sides and Atletico Madrid which had played one game less.

Los Blancos controlled the first half with goals from Karim Benzema and Toni Kroos putting the White into a commanding 2-0 lead at the break.

However, Ronald Koeman‘s side reacted positively after the restart with defender Oscar Mingueza scuffing home on the hour mark as the rain continued to pour in the final stages.

But despite being reduced to ten men in the closing minutes after Casemiro was dismissed for two quick bookings, Real Madrid dug deep and survived a late scare as substitute Ilaix Moriba volleyed against the bar in added time.

The result takes Real Madrid level on points with Atletico Madrid but with superior head-to-head record.

Related Topics:barcelonaReal Madrid
Up Next