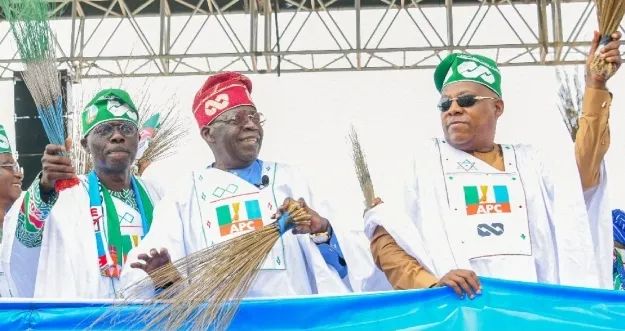 Tinubu, who made the call at the party’s mega rally held at the Teslim Balogun Stadium in the Surulere area of Lagos, implored the citizens to reject the PDP presidential candidate, Atiku Abubakar, because of the party’s poor performance during its 16 years in power.

The former Lagos State governor also appealed to APC supporters to work for Governor Babajide Sanwo-Olu’s success in next year’s election in the state.

The APC candidate said: “We must never again allow the rapacious and visionless gang of Peoples Destroying People to come near our commonwealth again.

“They were in government for 16 years. They didn’t remember the Badagry expressway, East-West road, and even the Second Niger Bridge.

READ ALSO: Those still in doubt of Tinubu’s age should meet his late mother to confirm —Gbajabiamila

“Atiku has been running for the presidency since 1993. Use your PVC to vote him and his party out. Use your votes to retire him permanently this time.

He commended President Muhammadu Buhari for his support to the state.

Tinubu added: “I specially thank President Muhammadu Buhari for the unprecedented federal support and commitment to Lagos State. We have come a long way from presidents whose sole obsession was to capture or conquer Lagos in do-or-die fashion, to a president who loves the state greatly and is keen to see it do very well.

“Lagos has benefited tremendously in terms of infrastructure development, whether it is the Lagos-Ibadan railway line, or the Apapa-Oshodi-Oworonsoki expressway, the revamped national theatre, the new international airport terminal, or the support that has made the Lekki Deep Sea Port possible and the Dangote Refinery and Petrochemical Plant, as well as the Red Line of the Lagos Metro, which is sharing part of the federal corridor.”’

Why I pity next governor of Cross River – Donald Duke