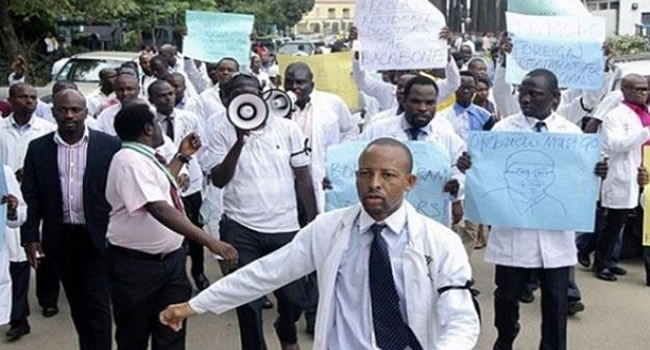 The National Association of Resident Doctors (NARD), on Friday, insisted that it would continue the ongoing nationwide strike until the Federal Government implements the terms of their agreement, including the payment of salary arrears and the life insurance claims of their colleagues who died from COVID-19.

This is even as drug manufacturers also lament that the strike action by the doctors has taken a toll on their business, as sales of drugs in most hospitals has dropped.

The Federal Government had claimed it signed a Memorandum of Action (MOA) with the association towards averting the ongoing nationwide strike by resident doctors, which commenced on Thursday, April 1.

It had claimed that the agreement was signed at midnight on Wednesday after a marathon meeting between the government and the leadership of NARD at the office of the Minister of Labour and Employment, Senator Chris Ngige, but on Thursday, the doctors commenced the strike action as they warned.

There has been confusion in some quarters on whether the resident doctors made real their threat, as some hospital management and the government claimed work was ongoing, while NARD kept confirming that the strike action was indefinite and being complied with by its members.

When Ripples Nigeria contacted the President, Association of Resident Doctors (ARD), Lagos University Teaching Hospital (LUTH), Dr. Hassan Jimoh, he said its members were strictly complying with the strike, as ARD is an affiliate to NARD.

READ ALSO: Ngige slams doctors over strike, claims they went back on agreement with govt

He said: “ARD LUTH is NARD and we are the largest branch. As such the compliance has been excellent and I assure you that if you go to LUTH now, you’d see that the whole place is deserted.”

“They come on national TV and tell Nigerians lies. So it is not unexpected that you could be getting that kind of information flying around.”

At the Federal Medical Centre and the State Specialist Hospital in Jalingo, Taraba State, Ripples Nigeria gathered that only emergency cases were being attended to.

ARD president at FMC Jalingo, Dr. Divine Njadze, confirmed to journalists that doctors were complying with the strike but noted that only those on Consolidated Medical Salary Structure 6 and above, medical consultants, and chief medical officers were offering skeletal services at the hospital.

The association’s president at the State Specialist Hospital, Jalingo, Dr. Gabriel Ahmed, confirmed to newsmen that doctors in the hospital were complying with the strike, and cannot do otherwise until they get “a contrary directive” from the national leadership of the association.

Also, in Edo State, the association’s president at the University of Benin Teaching Hospital, Dr. Ifeanyi Ofuani, confirmed that patients in the hospital were not being attended to.

Although Ofuani maintained that no resident doctor would attend to any patient, whether emergency or otherwise, consultants were seen on the ground, ready to attend to emergency issues.

“They gave us another memorandum of understanding or action, whatever they call it, to sign and we are tired of that. We have been signing that since 2014 and up till today, they have not honoured any of the memoranda. We want action; we don’t want memoranda anymore,” he said.

At the Obafemi Awolowo University Teaching Hospital, Ile Ife, a resident doctor confirmed to Ripples Nigeria that there was total compliance to the strike action, saying the hospital was almost empty.

Also, the resident doctors at the University College Hospital, Ibadan, Oyo State, complied fully with the directive but said consultant physicians were still at work attending to critical cases.

A pharmacist with Hovid-Integrated Global Pharmaceutical Partner, Nwabueze Oguamanam, told Ripples Nigeria that the strike was affecting drug manufacturers as there was low patronage by the affected hospitals.

Oguamanam said, “The affected hospitals are only attending to emergencies and because of this, drug usage has dropped as well as supplies. So that’s the problem. It’s a cycle and it’s affecting the whole process.”

Meanwhile, the resident doctors, said the Minister of Labour and Employment, Dr. Chris Ngige, should be held responsible for any loss of lives that might be recorded while the strike persists.

In a series of tweets on Friday on Twitter, the association using its handle @nard_nigeria, said, “The minister @LabourMinNG should be held responsible for the lives that will be lost from the industrial dispute.”

In another tweet, NARD faulted President, Muhammadu Buhari, for travelling to London for a routine medical check-up, saying it was a shame, as Nigerians were dying.

Meanwhile, Ngige had threatened that if by the weekend the resident doctors remained adamant, their fate would be decided based on extant labour laws.

Ngige had said the government was surprised that the resident doctors could still proceed on their strike after agreements were reached on all their demands.