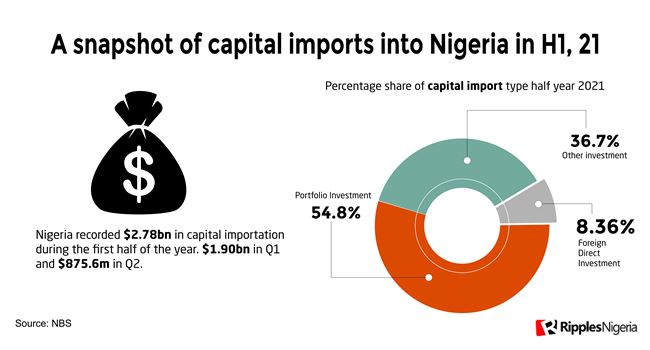 Nigerian States’ struggle to attract investment continued in the second quarter of the year, with only three states recording investments out of 36.

According to the National Bureau of Statistics (NBS) capital importation report for second quarter, Nigeria attracted $875.62 million investment in the last three months, indicating a 54 per cent decline when compared to $1.91 billion recorded in Q1’21.

This is followed by Abuja’s $95.26 million and Ogun $0.3 million worth of investments.

All the remaining states received no foreign capital inflows during the quarter under review, NBS report indicated.

What this means is that since the start of the year, only eight states have been able to attract investments.

The other states to have announced investment this year are Akwa Ibom, Anambra, Kano, Kwara and Delta.

Type of investments in Q1

Stanbic IBTC Bank Plc attracted the highest investment in the sector with $310.21m. This is followed by Standard Chartered Bank Nigeria Limited with $282.37 million. Union Bank, which has been the subject of takeover speculation, had the third highest value of capital imports at $29.59 million.

Other sectors to have attracted investment include Financing, attracting $205.88 million and $194.59 million through shares.

South Africa came in second with $212.39 million while United States brought in $83.41 million.

As the country’s security issues persist, investors are concentrating their funds in States and sectors where they believe the risks are lower.

In a recently released research by SBM Intelligence, at least a total number of 2,371 persons were kidnapped in Nigeria in the first half of 2021.

Furthermore, the data show that the impact of the pandemic has continued to have an impact on foreign investment.

Ripples Nigeria had earlier reported that amid a dwindling Federal Allocation Revenue, only three states can generate up to 50% of their running costs.

As expected these states are Lagos, Ogun and the Federal Capital Territory.

ICYMI…RipplesMetrics: Data show banks are just as guilty as BDCs when it comes to forex offences