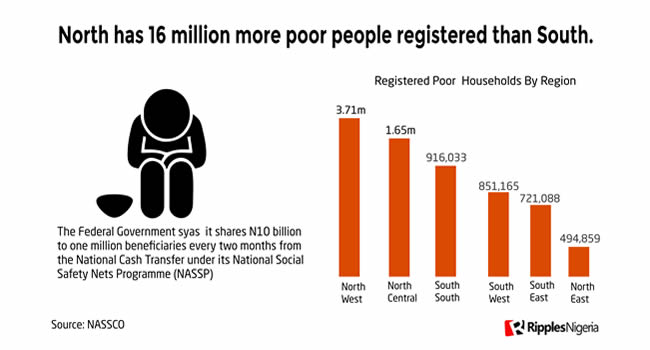 With 16.6 million individuals registered in the National Social Registry, North West has twice as much the number of poor and vulnerable people in Nigeria.

The register, which is intended to manage the monthly conditional cash transfer of N5,000, also represents President Muhammudu’s reaffirmed commitment to raise 100 million people out of poverty over the next ten years.

Breakdown of data shows the registered poor and vulnerable from Jigawa, Kaduna, Kano, Katsina, Kebbi, Sokoto and Zamfara accounts for 47 percent of 35.4 million total poor people registered across the country as at May 31.

Further analysis of the data shows a huge divide as cumulatively there are 16 million more individuals registered as poor in northern states compared to the southern states.

On State by State breakdown, Zamfara has the highest registered poor with 3.84 million people from 825,337 households while Ondo State has the lowest number with 171,119 registered currently captured from 48,518 households.

Further disaggregation of the statistics reveals that 17.3 million of the registered poor are male, while 18.1 million are female.

The register also has 8.3 million households officially registered as poor or vulnerable.

According to him, the cash transfer has helped parents feed, send their children to school, buy books and school uniforms.