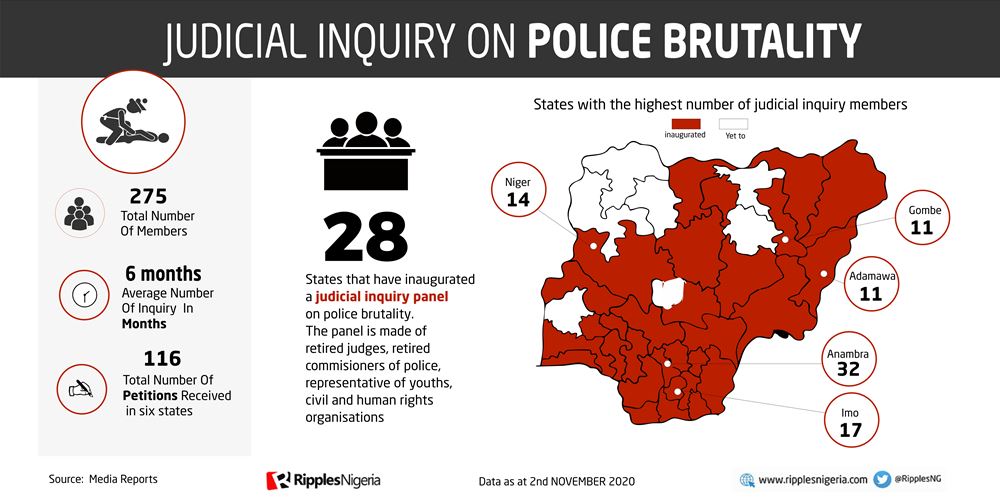 Nigerians will be counting on 275 judiciary panels of inquiry members set across the country by 28 state governors to investigate various acts by the Nigerian police that have left families, victims and communities in anguish and bereavement.

The 275 members comprising retired judges, ex-police officers, human rights  and civil organisations, are expected in an average time of six months to have completed their enquiries and create action plans for prosecution and compensation.

Ripples Nigeria compilation as at 2nd November 2020,  shows Anambra has the highest number of judicial  panel of inquiry members with 23, followed by Imo state, Edo and Osun states members of 17, 12, 12 respectively.

Plateau state judicial panel of inquiry members of five is the lowest, but it is constituted with a strong unit. A retired judge, a retired commissioner of police and a member from human rights commission.

While most of the states will be looking at a six months duration for the members to submit their reports, four states have a shorter time frame.

For Delta, Edo and Kwara, the state governments expect that within three months an investigation would have been completed for action.

Kogi and Anambra  are targeting one month for grievances to have been held and reports submitted while in Cross River, the state government is looking at 2 weeks.

As at the time of writing, six states,  Lagos, Ogun, Enugu, Ebonyi, Cross River,  and Akwa Ibom judicial panels have all announced that they have received 116 petitions from members of the public on cases of police brutality-Lagos 15, Ogun 20, Akwa Ibom 16, Enugu 58, Ebonyi four, Cross River, three.

In Nigeria, the use of unlawful lethal force is well documented and has been a subject of media reports over the years.

In 2009 Amnesty International published a report documenting extrajudicial executions and other unlawful killings by police in Nigeria.

The report revealed a pattern of police killing of hundreds of people every year. It found that many victims were unlawfully killed before or during arrest, while others were tortured to death in police detention.

According to the report, killings by police and deaths in police custody were not investigated and there was almost no action to hold police officers to account.

For families and victims they can only hope that their years of prayers for justice is finally answered.