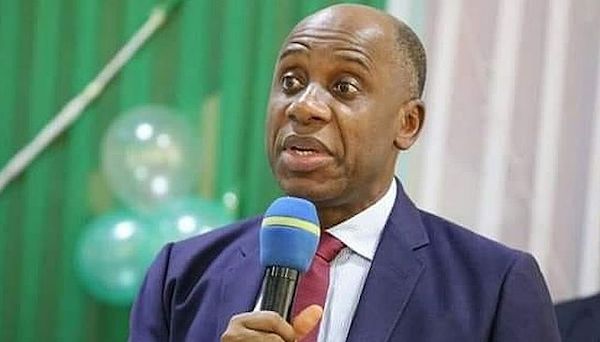 A faction of the All Progressives Congress (APC) in Rivers State has frowned at the absence of the Minister of Transportation, Rotimi Amaechi, from Tuesday’s South-South stakeholders’ meeting with the Nigerian Government.

In a statement on Wednesday signed by Livingstone Wechie, media adviser to the state APC acting Caretaker Committee chairman, Igo Aguma, the party said that Amaechi’s action was evidence of his type of divisive and selfish leadership in the state APC.

The party in the statement therefore, asked Amaechi to tender an unreserved apology to the people of Rivers and the state APC.

The state faction of the party has been factionalized with one side loyal to Amaechi and the other loyal to Send Magnus Abe.

The statement said, “The action of the godfather of the APC in Rivers State, His Excellency, Rt. Hon. Rotimi Amaechi, is an evidence of the type of divisive and selfish leadership he is giving the APC in the state, which is solely aimed at destroying the party at all cost for his personal gain in keeping with his vows.

READ ALSO: Nigeria may return to use of old locomotives – Amaechi

“The APC in Rivers State, therefore, demands that His Excellency Rt. Hon. Rotimi Amaechi should follow the precedent set by the Presidency by tendering an unreserved apology to the people of Rivers State and the APC in the state over his embarrassing action,” the statement read in part.

The South-South governors and other stakeholders from the geopolitical zone met with the presidential delegation led by the Chief of Staff to the President, Professor Ibrahim Gambari at the Government House in Port Harcourt, Rivers State.

At the meeting, the South-South leaders had called for the restructuring of the country in line with the principle of true federalism.

But the APC frowned that Amaechi was in Port Harcourt and allegedly welcomed the presidential delegation but failed to partake in the crucial meeting.

According to Wechie, the minister’s absence from the meeting could not be justified, describing it as embarrassing.

Related Topics:AmaechiRivers APC
Up Next