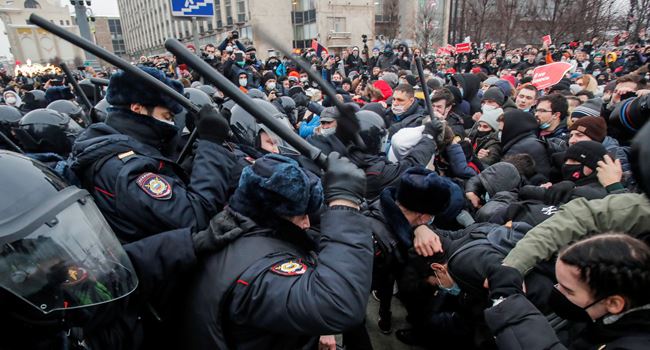 Concerned authorities in Russia on Saturday issued an arrest threat to supporters of Kremlin critic, Alexey Navalny who are preparing for a fresh round of anti-government protests on Sunday.

Reports say Navalny’s supporters are planning a nationwide protest despite a police crackdown and strong warnings against participating in the demonstrations.

Spokeswoman for the Russian interior ministry, Irina Volk in a statement issued on Saturday said participants found in violation of epidemiological regulations by participating in rallies could face criminal charges.

“The Russian interior ministry units and other law enforcement will use all necessary measures to ensure public order at sites of mass events. Moreover, we warn that any violent actions against officers or refusal to obey their lawful orders will be prevented.

“Individuals who commit such illegal actions will be detained and held accountable according to the law,” Volk added.

This came days after the police in Russia arrested no fewer than 3,000 supporters of Navalny, and also violently broke up rallies across Russia as tens of thousands of protesters marched through the country.

QuickRead: Igboho’s rise to fame, Lai’s ramblings. Three other stories we tracked and why they matter