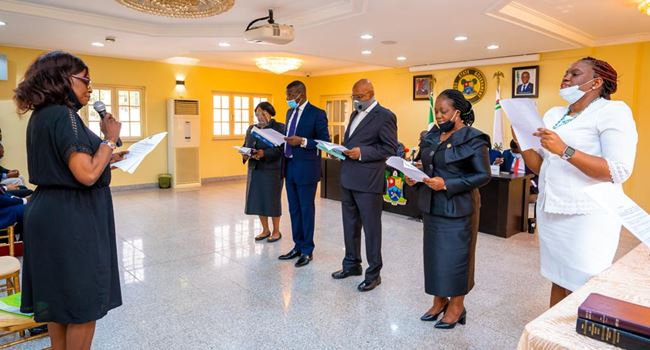 Governor of Lagos State, Mr Babajide Sanwo-Olu, on Monday swore in a Judicial Panel of Inquiry and Restitution to address cases of human rights vilations by members of the just disbanded Special Anti-Robbery Squad (SARS), a unit of the Nigeria Police Force.

The move followed a demand by protesters in the #EndSARS campaign for an end to police brutality.

Announcing the move on his twitter handle on Monday, Governor Babajide Sanwo-Olu said “As we move to end police brutality, by virtue of Section 5 of Tribunals of Inquiry Law, Laws of Lagos State, 2015, I inaugurated an 8-man Judicial Panel of Inquiry and Restitution which will receive and investigate complaints of police brutality in Lagos”.

He said the terms of reference of the panel will include the following:

“To listen to & take evidence from all victims or the families of victims of SARS abuse within Lagos State (somewhat akin to what the Truth and Reconciliation Committee did in some countries). This would enable all victims & their families air and vent their grievances in public.

“The Judicial Panel after listening to victims or their families would then determine whether any victim or the dependents of such victims are entitled to compensation and the amount of compensation payable.

“Upon determining the compensation payable, the Judicial Panel is to immediately issue a check in favour of the victim or their dependents.

“The Judicial Panel is also to determine the officers (or anyone for that matter) responsible for abusing any victim and to recommend the prosecution of such persons.

“The Panel shall also have powers to make recommendations to Government on how to ensure that the Police and all security agencies never abuse the rights of citizens again”.

ASO ROCK WATCH: As Buhari battles lack of trust in his administration. Two other talking points