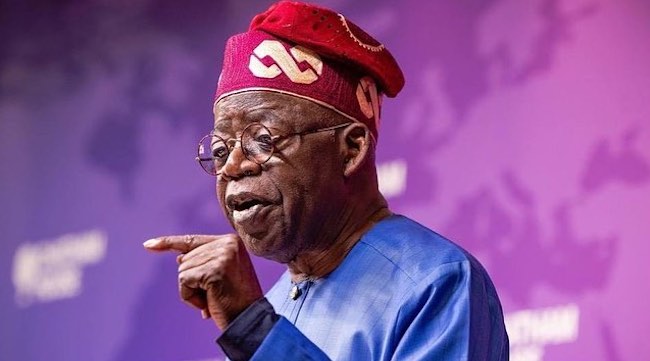 Nigerians have been talking about Asiwaju Bola Ahmed Tinubu’s statement concerning one of his rivals at the 2023 Presidential polls, Peter Obi.

The All Progressives Congress (APC) presidential candidate said, during his campaign at Abia on Tuesday, that the electorates owed him votes.

The former Lagos state Governor, who is known to hail from Osun state, in his remark also dismissed Labour Party’s Obi as a “challenger,” calling him his “tenant” in Lagos.

While in Abia, Tinubu urged APC members and supporters to secure the party’s victory on February 25 and March 11.

The comment by Tinubu got people talking as many wondered why Obi being his tenant in Lagos meant that the Igbos in Abia owed him votes.

Daddy: Datti come and see o, Tinubu say Igbo owes him votes, that I am his tenant in Lagos…

Datti: hehehe yes abeg leave am, I don see am already abeg no reply am again, the one Dino do am don do ,🤣🤣🤣#POinGombe pic.twitter.com/ipRekpl6gN

"Igbos owe me votes; Peter Obi is my tenant in Lagos State," says Bola Tinubu, the man from Osun State.

I blame the real owners of Lagos.

If God made Nebuchadnezzar eat grass who is Tinubu ? 😂😂The Lagos landlord is about to receive the biggest disgrace of his political career.

No wonder ur visionary and the people that is not visionary is taken up ur land to make u tenant at ur ancestrally land. You people are blind. Tinubu can not even be a local government chairman in Anambra.

Everything about Tinubu is entitlement. Imagine saying Obi is his tenant and that Igbos owe him votes? Igbos are the smartest voters in this country. They know how to respond to this statement 😂.

Igbos owe me votes; Peter Obi is my tenant in Lagos, Tinubu says.

Tinubu should stop taking drugs, it's messing with his head. Say No to Drugs!

Both Obi and Tinubu are tenants in Lagos. One(Obi) came in as a business man while the other one (TINUBU) came in as omo odo( slave) ati owun rin wa ati oko wa ba leje https://t.co/zuelC2UduP

Obi is a boy he will lose woefully next month we shall see,he will remain was Tinubu tenant in lagos pic.twitter.com/GJQNRFsUPm

The demise of the gubernatorial candidate was announced in a statement by his son, Dr. Chikezie Uche-Ikonne.

Professor Ikonne, last seen in public in November 2022 after his public presentation as PDP governorship candidate at the Umuahia Township Stadium, was reported to have died at National Hospital Abuja after a brief illness.

Nigerians are talking about the sudden death while there is also a dispute over his successor.

This is for those that mock old age and those that find pleasure in wishing other people death.

May his soul rest in peace pic.twitter.com/DLbn6KOCzb

On the issue of Ikonne, Abia Guber candidate. pic.twitter.com/hwrOVMGWDm

Prof Uchenna Ikonne had such a reassuring smile.
May his soul find peace.

Okezie Ikpeazu knew that his stooge Ikonne was sick to death but as usual, he wanted to impose another dying criminal on Abians so they'd spend the next four to five years crying and begging for good governance.

God punish all of you. God punish PDP & their members/supporters.