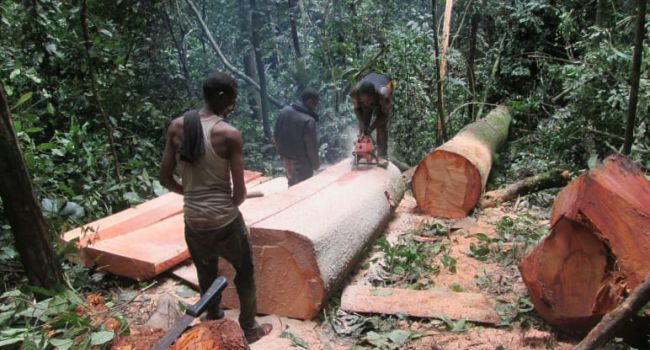 “With a N20,000 bribe, an external buyer can influence the youth in host communities , Cross River State, to cut down trees from the forest illegally.”

Travelling into the Cross River forest as a researcher – let alone a reporter- to investigate the increasing impact of deforestation in host communities is considered deadly; as illegal loggers possess harmful weapons and are ready to kill anyone who questions their operations.

These loggers, majorly youths in the host communities, negotiate with foreign buyers to extract some types of wood with specific amounts from the forest to be transported to an undisclosed location.

At the entrance into any of the affected host communities, logs of wood harvested from the forests are piled beside the deplorable roads leading into these communities with an inscription for transporters to easily identify the owner. The state governor, Ben Ayade, vowed to clamp down on the operations of the illegal loggers in the state. But the governor’s threat, this reporter learnt, has not been sufficient enough to end the criminalities that go on in the forests.

Cross River State, located in the South-South region of Nigeria, plays host to the largest forest in the country with a national park of 4,000 square kilometres. However, over the last decades, owing to illegal exploitation by loggers, the impact of deforestation has matured beyond a climate crisis to becoming a criminal activity in the state.

Despite attracting a United Nations climate programme in 2009 to develop a framework on forest conservation, the forest saw no changes as illegal loggers were alleged to have compromised the implementation processes. The UN REDD+ is a scheme to enhance the countries’ efforts to reduce emissions from deforestation and forest degradation, and foster conservation, sustainable management of forests, and enhancement of forest carbon stocks.

Log of timber wood to be axed into pieces of firewood. Credit: Kehinde Ogunyale

Years after this, investigations revealed that an external buyer can influence the youth in host communities with a meagre amount shared among them to fell trees in the forest.

Logging as a business

For several years, Donatus Ogre, had watched illegal loggers extract woods from the forest in Olum, Boki local government. This, according to him, had impacted greatly on the community’s agricultural growth and dependency of local swellers.

“There has been much cutting down of trees which are making our forest too dry. Some indigenous woods are going into extinction,” he said.

This illegal operation forced the community to impose a fine of N500,000 on illegal logging of woods. However, loggers still find their way into the forest as most of them consider it a fruitful business.

“Some people do not have any job at all. Illegal logging is the only thing they can do to survive or make money. Some people have taken it as a personal business to earn a living. These people  go into the forest, get the wood and saw it into planks.

“A length of plank can be sold for about N1,200 depending on the type of plank. It doesn’t have a fixed price; it’s based on negotiation. Sometimes in a week, we can have at least five trucks of wood out of the village,” he emphasised.

Ogre mentioned that in some communities, villagers have left their businesses to venture into logging despite being an unlawful activity. In Olum, however, Ogre alleged that only five people are known for the trading of these wood but laws have been enacted to curb  their operations in the forest.

This reporter learnt that the state has a forest law that guides the business of removing and replanting woods in the forest. Thus, a forestry commission and task force unit (now defunct) was set up to enforce and arrest illegal loggers but people living in host communities alleged that the task force’s operation has barely made an impact in the forest.

Getting the woods out

Obong Cletus, a Chief-Head in Ifunpa, Akampa local government, living in the Ifunpa is of a great advantage to him and other indigenes as the forest had served as a major source of feeding, livelihood, shelter and business for the community. “In the forest, we can find good water, bush meat, palm-fronds for shelter, and fresh leaves that we cook, use for medications or sell and make money,” he said.

However, in 2020, things began to change for people in the community after a palliative work was done on the road leading into the community. Obong stressed that the road network opened the community to more illegal logging activities.

“As you have seen the sunwood, it is not of our taste but it is something you can not avoid. The youth would bring strange equipment into the forest. When we try to stop them, they say they would have us killed.

“Because of the fear, even to the council members, we will have to allow them. Nobody comes into the village to do any form of consultation. A non-indigene would come and move straight into the bush and extract over 10 logs of wood with various tractors.

“In the past, when the forestry commission was functional, they would come into the village, count the number of woods to be harvested and the village would have an allocated royalty coming directly from the government. But now, a little token is collected as a gate fee. The youth who are bold to collect it own it; no one can do anything about it,” he said.

Obgon, who mentioned that the community lacks basic access to water, education, and electricity, said while the impact of the logging has continued to threaten the survival of indigenes, an external buyer can bribe a youth with N20,000 to get woods out of the forest.

“Lawlessness is also a key factor. Our youths, when they have nothing to do, they go as far as Delta State to bring loggers into the forest who say ‘take N20,000 and show me where to saw wood.’ For how many days would he use the N20,000? He has become poorer than before. They cannot trade by themselves and look for a market to sell,” he said.

Beyond the climate impact, Ifunpa community has lost several revenue and  infrastructures to these illegal operations.

“The fear of the forest is the fear of my life because forest brings life. We all depend on the forest. The whole of the village, there’s no borehole. The taskforce collects a lot of money from these activities but no government presence. The only primary school here, we built it. We built the secondary school and are planning to build a customary court to reprimand; these are all community efforts,” Ogbon said.

This reporter learnt that logs of wood are sold at cheap prices to buyers with no form of revenue coming back to the development of the community.

“We do not make any money from this illegal trade. We have to pick between our lives and saving the forest and we lose daily to this,” he said.

The community alleged that the government supported the youth in this exploitation and  mobilised policemen to escort tractors.

Repeated efforts to reach the conservator of the state’s national park, Zanna Lawan, for a meeting to clarify these allegations proved abortive. An office assistant told this reporter that Lawan was unavailable over the course of two weeks. When this reporter eventually got through to him on his mobile phone, he said, “I will get back to you.”

Aside from insecurity, deforestation, environmental and developmental challenges, there are also challenges of climate impacts associated with these ongoing illegal activities.

Eme Okang, the head of office and research team for We The People, a non-governmental organisation fighting deforestation in the state, said the ongoing deforestation within the state’s   forest is degrading the community, noting that it is also a systemic operation caused by external factors.

“Obviously, the forest’s host communities seem to help. It has gotten to the point now that instead of losing their recourse without the economic benefit, they are now aiding and abetting the indigenous people in the community and loggers’ to come take their wood.

“The government of the day is doing nothing despite a ban on deforestation and enforcement yet we are losing our forest every day. I believe loggers, task force officials, and the government are all complicit in this,” she emphasised.

Okang noted that the poor implementation of the UN REDD+ and the failure to fulfil the promise of carbon credits to the community made them turn against their forest, adding that the effect of climate change is not just affecting the host community, but the entire state.

On the effect of climate crises, Okang said, “We are experiencing storms, excessive rainfall which transcend to uprooting trees and bringing down houses and others. The temperature is on the rise and everyone is being affected. There is nothing wrong in doing timber business but it has to be sustainable. Even, before now, our fathers built and are still building but we never lost forest the way we are losing it now.

“Even the timber merchant cannot do business like before because external bodies have taken it away from them. We are losing water bodies, streams and fishermen cannot bring in enough catch because of the receiving water bodies. We are rising in tides, we are losing mangroves, and we do not have good yields because of moisture in the earth which has an effect on income,” she said.

For Obong, he added that, “Government should bring back the forestry commission so that the forest guards can arrest these issues. We, as indigenes, are committed to assisting the forest guards to stop the illegal sawing or cutting of woods in the forest. This sawing of sun timbers started as far back as 2020 when some palliative works were done on the road that leads to the forest.”

In a separate development, Obort-Obio Aranwai, a clan head of Esie clan in Akmapa local government, said beyond enforcing the law, a conservation process has started in host communities by non-governmental organisations to preserve the forest resources.

“We are pushing for awareness within the youth and all elders in the community. At least a minimum of seven tons of wood comes out from the forest daily. The way forward is to stop the blame game between the government and the community and structure out a plan that helps grow the forest and eradicate logging from it,” he said.