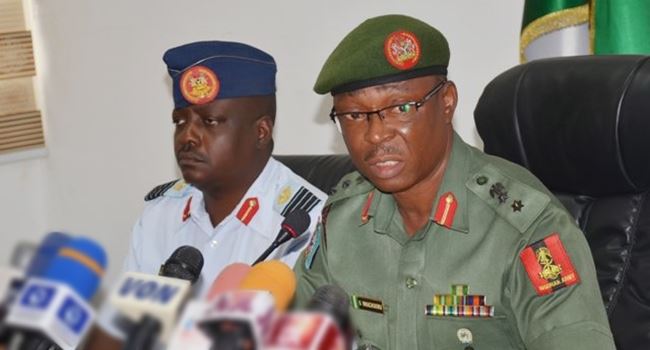 The soldiers, five in number, were said to have disappeared with the fund a week ago. They were subsequently declared wanted for diverting funds meant for military operations, and an order for their arrest was issued to military formations nationwide.

But speaking on Tuesday in Abuja, the acting Director, Defence Information, Colonel Onyema Nwachukwu, told newsmen that the matter is being investigated by appropriate authorities and that the outcome will be made known to the public in due course.

He said he would not like to pre-empt the investigation.

“The event of suspected soldiers’ disappearance with some amount of money is being investigated by appropriate authorities. The outcome will be made known to the public in due course. I will not like to pre-empt the investigation,” he said.

He stated this on a day troops of Operation Hadarin Daji, rescued over 50 kidnapped victims, killed 78 armed bandits in their enclaves and recovered a cache of arms and ammunition.

According to Nwachukwu, banditry attacks and killings in Zamfara State, aside the struggle for gold mining could have connection with issues of ethnic rivalry, migration of Al-Qaida in the Maghreb, and political animosity among groups in the state.

“Operation Hadarin Daji was recently reorganised and reinvigorated by the Defence Headquarters with the acquisition and injection of new platforms and additional manpower to curtail armed banditry, kidnapping and sundry crimes.

“The reorganisation is already yielding results as the joint troops of Operation Hadarin Daji have recorded several significant achievements in the theatre of operations.

“Since the commencement of the joint operations, the troops have recorded several successes, including a daring rescue operation in which troops neutralized 54 armed bandits in an encounter in fortified enclaves at Moriki, Madada and Dumburum forests in Zamfara State. Several assorted firearms were also recovered from the bandits.

“It will suffice to mention that in the last two months, the gallant troops have in a series of successful encounters, rescued over 50 kidnapped victims and neutralised 78 armed bandits from various fortified enclaves in Zamfara and contiguous states.

“The troops have also recovered a total of 39 firearms, which include 16 AK-47 rifles, one light machine gun, 14 dane guns, two pump action rifles, three semi automatic rifles, three pistols and 2,437 rounds of 7.62mm special ammunition. Additionally, over 25 armed bandits have been arrested and 14 motorcycles used by them recovered,” Nwachukwu said.

You are nothing but a town crier, Afenifere replies Junaid Mohammed