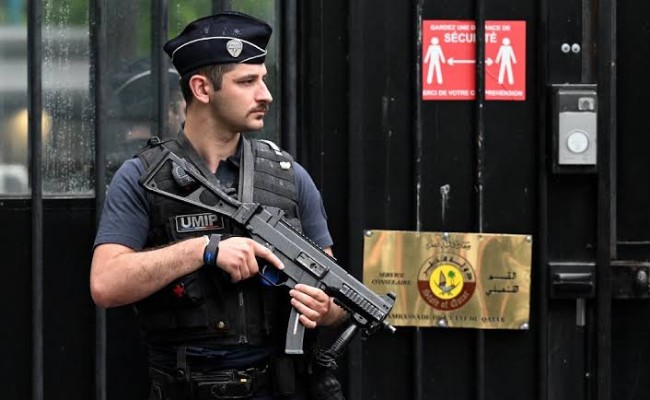 A 38-year-old man who broke into the Qatar Embassy in Paris, France, and killed a security guard has been arrested by security operatives.

The incident reportedly happened at about 6.30am local time on Monday at the building which is close to the Champs-Elysees, after the suspect allegedly forced his way into the building.”

The 44-year-old guard was allegedly attacked following an altercation as the suspect entered the building, according to reports by a local news station.

“The suspect, from Sevran, Seine-Saint-Denis, entered the embassy and had a row with the security guard, who died after being assaulted.

“The 38-year-old assailant, who is known to the police, was arrested at the scene,” the station reported.

The French prosecutor’s office also confirmed the death of the security guard and has launched a criminal investigation.

“I can confirm that an investigation was opened today on the count of murder. The circumstances of the death of the guard are yet to be determined precisely,” the prosecutor’s office said in a statement, adding that it was not clear yet if a weapon had been used.

The Qatar Embassy in Paris, in it’s own statement, said:

“In a heinous and unjustified crime, a security officer from the Qatari Embassy in Paris was killed on Monday morning. Law enforcement quickly arrested the suspect and opened an investigation.

“We await the results of the investigation and invite respect for the privacy of the family of the deceased. The Embassy expresses its deep sorrow following this crime and offers its most sincere condolences to the family of the victim.”

Related Topics:Qatar Embassy
Up Next