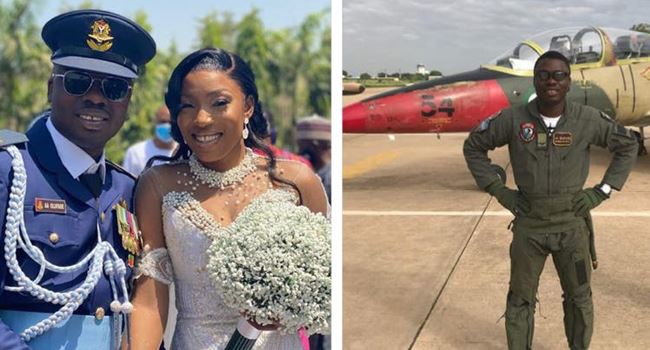 More tears flowed among friends and families of victims of the ill-fated Beachcraft 350 aircraft that crashed at the Kaduna International Airport on Friday.

The grief was felt by more Nigerians when it was discovered that the Nigerian Air Force pilot, aboard the plane was Flt Lt Alfred Ayodeji Olufade who only recently got married.

Also, it was gathered that the co-pilot Flt Lt Taiwo Olufemi Asaniyi who also died in the accident was set to also marry before death snatched him away.

A tweep, @Sir_KB, wrote, “My heart is in pain. I lost my friend. Flight Lt. AA Olufade. He got hitched months back and often teased me to get out of the bachelorhood. Rest well Freddy.”

A tweep, @_victor_kings, wrote, “Flight lieutenant T.O Asaniyi. He flew the plane, we had his introduction in March. I was going to be his best man” bemoaning Asaniyi’s death.

The duo were pronounced dead alongside the Chief of Army Staff, Lt. Gen. Ibrahim Attahiru, and nine other military personnel onboard the jet when it crashed around 6pm on Friday.

This continued a trend of death of military personnel with at least 20 military officers losing their lives in the last three months in three crashes involving Nigerian Air Force jets.