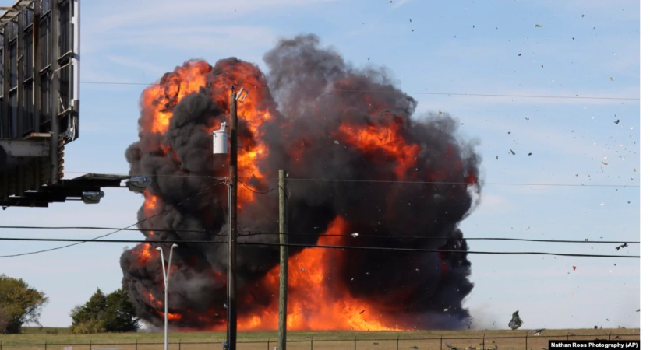 Two US military planes on Saturday, collided in mid-air during an air show in Dallas, before crashing to the ground and bursting into flames.

The two jets, a B-17 Flying Fortress bomber and a P-63 Kingcobra fighter plane, collided and crashed around 1:20 p.m., during a Commemorative Air Force Wings Over Dallas show, the Federal Aviation Administration said in a statement.

Though it was not immediately clear how many people were on board the aircraft, or if anyone on the ground was hurt, spokesperson for Commemorative Air Force,Leah Block, told journalists preliminary reports indicated there were five crew members on the B-17 bomber and one aboard the P-63 Kingcobra fighter plane.

Emergency crews raced to the crash scene at the Dallas Executive Airport, about 10 miles (16 kilometers) from the city’s downtown while live television news footage from the scene showed people setting up orange cones around the crumpled wreckage of the bomber, which was in a grassy area.

Dallas Mayor, Eric Johnson, who also spoke to journalists, said the National Transportation Safety Board had taken control of the crash scene with local police and fire providing support.