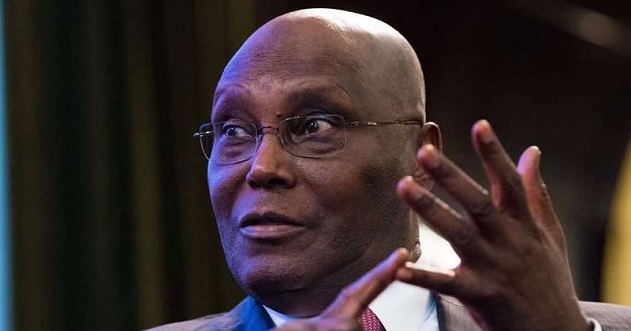 An official of the U.S. Consulate in Lagos on Friday spoke about the visa controversy involving Atiku Abubakar, former vice-president and the presidential candidate of the Peoples Democratic Party (PDP) for 2019.

The official said the issuance of U.S. visa to Abubakar or anyone else is strictly a confidential matter.

He said the U.S. Government will not discuss the issue in public for any reason.

The Public Affairs Officer (PAO), of the U.S. Consulate in Lagos, Brussel Brooks, made this known against the backdrop of the controversy surrounding Abubakar’s U.S. visa status.

It has been alleged that Abubakar has been unable to secure a U.S. visa due to the report of an American congressional panel that investigated allegations of financial impropriety against the ex-vice president and others years ago.

Abubakar, the main challenger to President Muhammadu Buhari’s re-election bid, has not visited the U.S. since then.

The Minister of Information, Lai Mohammed, on Thursday, appealed to the U.S. government not to grant Abubakar a visa in the election season as this would prompt speculations that the US was backing him.

Gbenga Daniel, former Ogun governor and Abubakar’s campaign official, recently claimed that the U.S. was “considering” granting a visa to the PDP candidate.

The American consulate official spoke during an education forum organised for 150 teachers and students drawn from various public schools in Oyo State.

The programme titled, “Teaching Resources: Availability, Applicability and Appropriateness” which took place at the Distance Learning Centre, University of Ibadan, was organised by Fulbright Language Scholars’ Association under the leadership of Tolu Akinwole.

Mr Brooks said the case of Abubakar’s visa status has been an issue in the newspapers for some time, but “the position of the U.S. Mission has remained the same throughout any discussion of this issue, that visas are confidential matters”.

He added: “We don’t discuss individual visa’s status of any person, whether it be a highly rated official, a presidential candidate or an average citizen.

“Anyone who applies for a visa should know that there will be some records that are confidential. It is classified as private documents by the United States Government, and we never discuss them in public.”

Brooks enjoined candidates at all levels to focus on issue-based campaigns and avoid distractions.

“Often times, unfortunately, campaigns are full of distractions, things that are not that important to the lives and welfare of average Nigerians, especially the children that are with us today. What is important for them is to give them the opportunities to serve in order to thrive in today’s world.

“This means they need a good education. The school should be improved. I will also encourage parents and voters to ask the candidates what they plan to do to improve education. I think issue-based campaigns will be beneficial to all Nigerians,” he said.

Ms Akinwole, while speaking, said the association, funded by the United States Consulate trained 350 teachers in Oyo and Ondo States in 2018.

She said this was done with a view to igniting vibrant teachers and providing solutions to the observed “inability of students to apply the lessons they learn in classrooms to everyday life.”

CHIBOK GIRLS: ‘I can’t take responsibility for their abduction’- Jonathan

I’m a descendant of Abraham- Buhari