We were not voted to only pay salaries— Governors

Home » Politics » We were not voted to only pay salaries— Governors 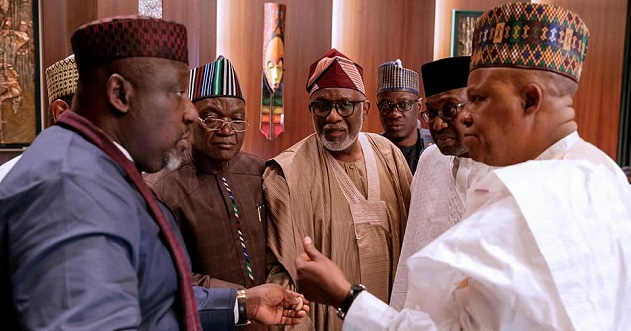 Governors under the umbrella of the Nigerian Governors Forum (NGF) say they were not voted into power to only pay salaries.

They say their mandate also demands of them to provide good roads, electricity, education and other social amenities.

The governors said this in response to the new minimum wage debate.

The chairman of the NGF and Zamfara State Governor, Abdulaziz Yari, said this was part of the discussion they had at a meeting on Wednesday night.

Yari said it was regrettable that state governments were constrained to payment of salaries while other sectors such as health, electricity and education suffered.

“We have a committee of six which represented us in discussions in the committee headed by labour minister,” he said.

“For instance, in global practice, in your income, how much are you spending as salary? So that we can start from there. They have given us interim report, that at the federal government level, over 82 percent is being spent on overhead which cannot move the country forward in terms of infrastructure development and development that we need now.

“So, on our own part, we are saying we are going to look at how our income are trained from our final account from 14 years ago so that we can come up and stay in the middle.

“I don’t think you people voted us for only to pay salaries. You are looking for good roads, electricity, education and others. So, we can’t do magic. It’s only when we have the funds do all those things.”

Yari said the governors also deliberated on the way the anti-graft war was being waged and resolved that there must be strict adherence to due process.

Speaking on the freezing of Akwa Ibom and Benue states government accounts by the Economic and Financial Crimes Commission (EFCC), Yari said that even President Muhammadu Buhari will not support the action.

“We believe strongly that the government of President Muhammadu Buhari will not sit down and supervise this illegality in the system,” he said.

“What we are saying is that we all support the government to fight corruption because it is endemic and has suffered the nation for over six decades. Definitely, it was part of what we discussed.

“What we are saying now is that we are going to support the government in terms of what it is doing to fight corruption, but the due process must be respected in whatever action the agencies are going to take in the name of fighting corruption.”

Meanwhile, Abubakar Badaru, Governor of Jigawa State, said the NGF have hired lawyers to challenge the power of the Economic and Financial Crimes Commission (EFCC) to probe security vote of states.

Badaru said the issue was discussed by the governors in their meeting on Wednesday night, adding that the lawyers had been instructed to investigate the case.