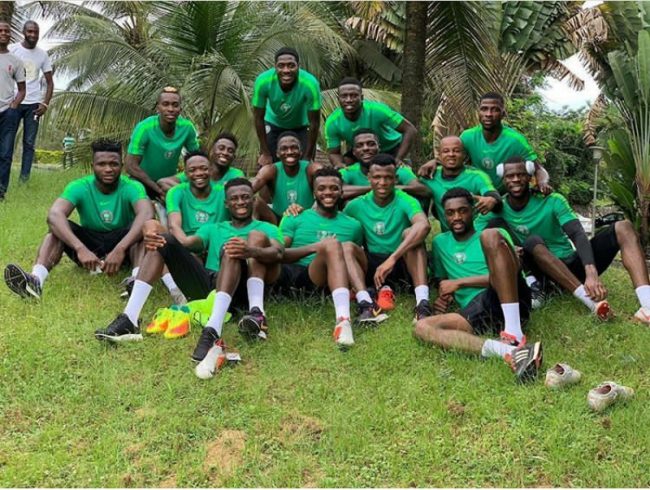 Ahead of their Africa Cup of Nations qualifier against Libya this weekend, stars of the Super Eagles of Nigeria are bent on securing a good result to ensure their participation in the 2019 finals.

The Gernot Rohr side will take on their Libyan counterparts at the Godswill Akpabio Stadium in Uyo this Saturday before both sides will play again in the reverse fixture in Tunisia next Tuesday.

Having begun the qualifying campaign with a disappointing 2-0 loss to South Africa last year, the Eagles returned to winning ways last month when they sealed a 3-0 win away to Seychelles in matchday 2.

“So happy to be in the team for the game against Libya. We are self motivated because a large number of us haven’t been to the Nations Cup before,” Henry Onyekuru told reporters in Uyo where the team are currently camped.

“Winning these two games against Libya will give us a a good advantage of qualifying for the tournament. We have good players and we have to justify it when we are called upon to play,” he added.

Nigeria have failed to make it to the last two editions of the Nations Cup as they had failed to qualify in both occasions after they won the title in 2013, but the players are ready to break the jinx.

“It’s a shame that we have failed to make it to the last two editions of the Africa Cup of Nations taking into cognisance our pedigree as one of the best footballing nations on the continent,” says goalkeeper Ikechukwu Ezenwa to a CSN reporter.

“This time around, we are determined to put things right by making it to Cameroon 2019. It’s a tough task but we are ready to go all out for it.”

Read Also: Rohr: Super Eagles will prepare for Libya like they did for Cameroon

Libya currently occupy the top position of the Group E on 4 points, followed by South Africa with an inferior goals difference, which leaves Nigeria on third spot with three points.

“I think everything is in our hands. If we get a good win in the first leg at home, it will give us good momentum going into the second leg which, fortunately, will be played in a neutral venue in Sfax Tunisia,” Mikel Agu said.

Speaking also to reporters in Uyo, left back Elderson Echiejile said: “We are currently third in the group and I think we can upstage them, winning over two legs. The team is self motivated by one thing which is hunger to qualify for the tournament which we’ve missed the last two editions.”

As quoted by the Twitter handle of the Super Eagles, Semi Ajayi said: “We know the importance of these two matches and are determined to do all we can to secure maximum points to give ourselves the best chance of qualification and make our country proud.

“We ask for the continued support from our fans as their support can make all the difference,” he added.

Unfortunately, the team’s captain, John Mikel Obi will not participate in both games. The Tianjin Teda of China star has not featured for the national team since their shock first round exit of the team at the 2018 FIFA World Cup in Russia.

“The last games we played, we missed the captain,” Ahmed Musa, who captained the side at Seychelles, said during a press briefing in Uyo on Thursday.

“But we played very well. We now have a full complement of the team players who missed out the last time out.

“Ekong is back and other players who missed out on the last game are back so we have a good team to beat Libya.

“Since we won the AFCON, we have not qualified and that’s the motivation. I know it’s a herculean task for us. We will win the first game.”

The matchday 3 encounter will take place at the Nest of Champions on Saturday by 4:00p.m.