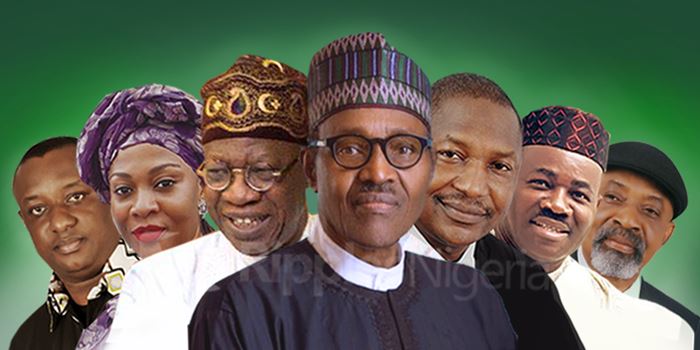 President Muhammadu Buhari will today (Wednesday) inaugurate his 43 Ministers-designate who were screened and confirmed, in July, by the National Assembly. It could be recalled that the President did not assign them possible Ministries that they would take charge of in the event of a successful screening. Several analysts have described that decision as akin to attending an interview without having any position in mind.

In a 2-day retreat held on August 19 and 20, by the Presidency, for the incoming Ministers, the President, during his address, on the first day of the retreat, stressed that his administration would depend on them to implement policies and programmes to lift Nigerians out of poverty.

In the Human Development Index (HDI), which is a summary measure for evaluating long-term progress in three basic dimensions of human development: a long and healthy life, access to knowledge and a good standard of living, Nigeria lags far behind. Most Nigerians have their eyes fixed on the actions that President Buhari-led administration would take in not just lifting Nigerians out of poverty but also confronting other nagging national issues which have given the country a bad reputation in the international community.

John Chukwu of Ripples Nigeria takes a look at the 5 HDI issues that should give President Buhari sleepless nights.

1. The over 10 million out-of-school children

Former Minister of Education, Prof. Adamu Adamu, on April 12, 2019, revealed that the Ministry (Education) conducted a National Personnel Audit of private and public schools in Nigeria, which showed that the country has 10,193,918 out-of-school children. The United Nations Children’s Fund (UNICEF) report authenticates this as they revealed that 1 in 5 out-of-school children in the world is a Nigerian, only 61% of 6-11 year-olds regularly attend primary school and only 35.6% of children aged 36-59 months receive early childhood education.

As no nation achieves meaningful development without education, President Buhari is assumed to be aware that the agenda of his Next Level administration cannot be achieved with a dilapidated education system.

In 2018, the World Poverty Clock reported that Nigeria has overtaken India as the country with the largest number of people living in extreme poverty, with an estimated 87 million Nigerians. A country that is riddled with poverty is not always free from crimes as people will always seek illegal means of making ends meet.

Of late, cases of kidnapping where victims are usually made to pay through their noses for them to be released have littered the Nigeria media space. The rising agitations by individuals and groups have also been linked with the prevalence of the economic crunch in the country.

This is made worse by the rising rate of unemployment. According to the National Bureau of Statistics, (NBS), in its Labour Force Statistics, released on December 19, 2018, it notes that the rate of unemployment rose to 23.1% of the workforce by the end of September 2018. This is further pronounced on our low Gross Domestic Product, (GDP), per capita. Recent reports note that Nigeria is in 148th position as a country which has low level of affluence compared to 196 countries

Going abroad for medical care is a common norm among the elite in Nigeria, especially politicians. This happens because of the poor health system in the country. Hospitals lack good medical equipment to take care of patients. Thus, many take the hospitals as death traps.

Not-too-long ago, a UNICEF report ranked Nigeria as the 11th highest on newborn deaths, with 29 deaths per 1,000 births of newborn. “A fair chance in life begins with a strong, healthy start. Unfortunately, many children in Nigeria are still deprived of this,” said Mohamed Fall. UNICEF Nigeria’s Representative. In 2017, World Health Organisation (WHO) ranked Nigeria 187 out of 191 countries in world health system. More so, Nigeria has the world’s third lowest life expectancy rate of 55 years according to the United Nations Population Fund (UNFPA). The report revealed that the life expectancy of an average Nigerian, in 2019, is only better than those of people in Sierra Leone, Chad and the Central African Republic.

It is still green in the minds of Nigerians that while President Buhari was campaigning for the 2015 presidential election, he promised to end the practice of political office holders going abroad for medical care. He, however, spent over 100 days in a London hospital, during his first term and still goes abroad for medical checkups. In various quarters, concerns have been raised for the President to upgrade the health system in the country.

Many industries, over the years, have reportedly fled the country due to epileptic power supply. The cost of production for a commodity goes up as industries have to buy petrol to fuel their generators and maintain them as well. Small scale industries that cannot cope with the situation are known to have folded. This, therefore, turns out to be a big minus to the economy.

In the Spectator Index’s long list of worst performing countries when it comes to electricity supply in 2017, Nigeria ranked second out of 137 countries. There has not been any meaningful improvement on this low rating. And this should be a thing of great concern to the President.

As a nation with a high population estimated to be over 200 million, the problem of housing has become the bane of many. Many civil servants are alleged not to be able to afford a decent accommodation while only a few are able to access government housing schemes as obtainable at the federal and state levels.

Landlords are reportedly increasing house rents indiscriminately especially in the urban areas. Therefore, making it difficult for only a few to have the wherewithal to pay for their rents.

The Vice President, Prof. Yemi Osinbajo, on December, 19, 2018, estimated that the country’s present housing deficit stood at a staggering 20 million houses. This is only an eloquent testimony of the dire situation of housing in the country.

The attention of the presidency has been drawn to this, on several occasions, it is thought that the President would give it a considerable attention.

While politicians may clamour for juicy offices, Nigerians are less interested in who becomes a Minister but more on the overall impact of government policies on their living conditions. The stats would seem scary but are they not what the ruling All Progressives Congress (APC) and President Buhari elected to deal with?

The government must understand that Nigerians now have their eyes firmly glued on all disturbing data, and are hoping for significant improvements in the next four years, justified by the mandate they freely gave the ruling party.

So, you ask, who really cares about Ministers and a leadership that are ignorant of what the objective conditions are but seek to revel in the temporary joy that transient power delivers?

Yet, the Ministers may be relevant but in so far as they direct action towards a genuine lift of Nigerians from the shackles of poverty.