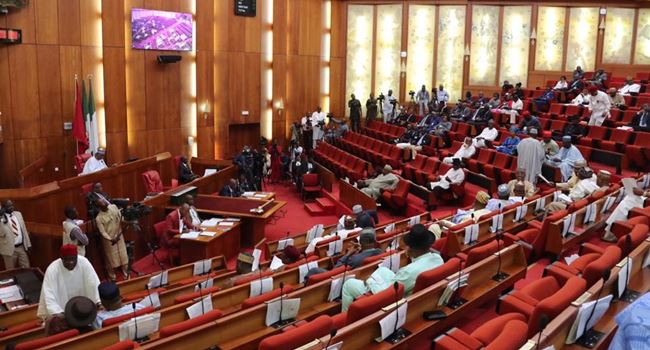 The Senate Ad-Hoc Committee on Security Challenges has called for a decentralisation of the Nigeria Police Force.

It suggested this as a way of improving efficiency aimed at addressing the problem of insecurity bedeviling the country.

Consequently, the upper chamber recommended to the executive arm of government that the Police Command structure be decentralised with operational and budgetary powers vested in the zonal commands.

These were part of the recommendations contained in the report the Senate Ad-Hoc Committee on Security Challenges submitted at the Senate plenary on Wednesday.

The Senate also recommended that all joint operations should be carried out strictly in accordance with extant operational procedures provided in the Armed Forces Act.

It advised the Federal Government to make full payment of allowances to officers and men involved in operations; introduce effective insurance scheme, gratuity and pensions, as well as set up a National Defence Fund backed by legislation, into which all Nigerian adults and businesses should make contributions for revival and investment in the National Defence Industry.

Earlier, Chairman of the Ad-Hoc Committee, Yahaya Abdullahi (APC – Kebbi North), while reading from a 74 page report on the ‘Urgent need to restructure, review and reorganize the urgent security architecture in the country, disclosed that the panel during the course of engaging heads of security agencies and stakeholders, discovered that there are ill-defined operational boundaries and overlapping jurisdictions among security services.

According to him, “there is a lot of incoherence and inter-personnel conflict which have led to a lot of antagonism within the security organizations.”

The lawmaker blamed the high level of inefficiency among security agencies on lingering inter-personnel disputes.

“The absence or inadequacies of effective corrective mechanisms within those institutions allowed inter-personal disputes to fester thereby undermining the operational efficiency of the services.

“Most of the agencies are working on isolation with very little, of any, coordination between them. This most unfortunate situations can be seen from the recent face-off between the office of the Inspector-General of Police and the Police Service Commission which degenerated into open litigation in the law courts.

“Most recently, the public release of letters from the National Security Adviser’s Office to the Service Chiefs dis-countenancing their engagement with the Chief of Staff to the President, Abba Kyari, bordering on security matters, is a loud testament of the level of disharmony, inter-personnel conflict and intrigued within the nation’s Security and Defence establishments,” said.

Abdullahi observed further that the alleged non-funding of the Office of the National Security Adviser (ONSA) since 2015 has undermined the effective performance of its coordinating function in the security architecture, and has led many agencies to question its authority and relevance in various fora, thereby adversely affecting inter-service cooperation and intelligence sharing.

The lawmaker added that, “the general absence of a performance, monitoring and evaluation mechanism within the institutions and services have undermined discipline and due diligence in the conduct of security related operations.

“Allegations have been rife that the quest for personal wealth acquisition has undermined institutional coherence and discipline and resulted in allegations of wastage of funds and squandering of appropriated resources. This is one of the sources of unhealthy competition and inter-personal rivalries within the various services.

“The security agencies tend to acquire modern technology and other force multipliers in isolation which resulted in the multiplication of incompatible platforms belonging to the different Arms of Services. This affected beneficial relationship and coherence of security operations,” he added.

Further blaming the failure to nip insecurity in the bud on the absence of an effective centralised criminal database for the country, the lawmaker bemoaned the lack of a comprehensive identity management data covering the country’s population with no interface of databases belonging to several institutions such as the Independent National Electoral Commission (INEC), Immigration, Customs, Nigerian Communications Commission (NCC), National Identity Management Commission (NIMC), among others.

“There is a general failure of governance to nip potential security breaches in the bud before they fester and result into serious security challenges,” Abdullahi stated.

Many of the senators who contributed to the report commended the committee for doing a thorough job.

However, Senator Rochas Okorocha (APC–Imo West) said, what was missing in this report was that the committee did not take out time to look at the relationship between the government and the governed.

“There is so much anger, there is no sense of unity in the fight against insecurity.

“No nation can fight a battle of this nature unless there is a unity of purpose,” he said.

Why APC Should Tame Tinubu Before Oshiomhole