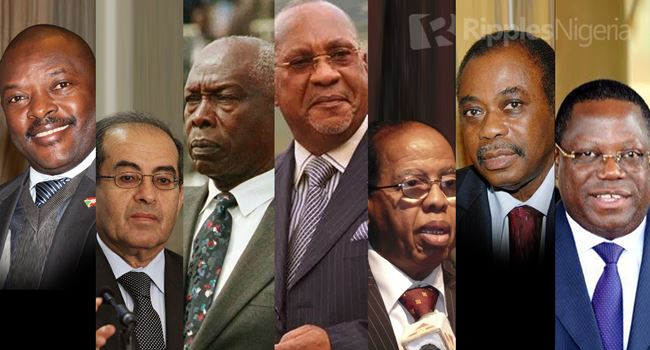 The year 2020 was one that many people across the globe will pray never to witness again as it will be remembered for the COVID-19 pandemic and the attendant casualties it wrecked on the world.

Many high profile deaths were recorded both in Africa and the world at large, but the announcement of death of prominent African leaders every other month was to a greater dimension as they played a big role in news coverage across the continent in 2020.

In this Year in Review series, we take a look at prominent African leaders who passed on in the year 2020.

In February 2020, Africa lost one of its most cerebral and intellectual leaders as former President of Kenya, Daniel Arap Moi, died at the age of 95.

Moi, a former school teacher, was Kenya’s second President and ruled for 24 years, becoming the country’s longest-serving president. Before his demise, he had been in hospital for over a month.

Despite being called a dictator by his critics, Moi enjoyed strong support from a large section of Kenyan citizens and was seen as a uniting figure when he came to power after founding President Jomo Kenyatta who died in office in 1978.

Moi later turned Kenya into a one-party state for years, but in 1991, he yielded to demands for a multi-party state due to internal and external pressure from the West.

Multi-party elections in 1992 and 1997 were marred by political and ethnic violence that critics asserted were caused by the state before Moi left power, handing over to Mwai Kibaki.

Former President of the Republic of Congo, Jacques Joaquim Yhombi-Opango, died on March 30, 2020, at the age of 81 in a hospital in Paris, France, after contracting coronavirus.

His family confirmed that he had underlying health conditions before contracting the virus. Yhombi-Opango was president of Congo-Brazzaville from April 1977 until he was toppled in February 1979 by the current President Denis Sassou Nguesso.

He spent years in prison till the country introduced multi-party democracy in 1991 and later served as Prime Minister under the government of Pascal Lissouba between 1992 and 1997, until a civil war broke out in 1997. He went into exile in France, before being allowed to return home 10 years later.

Former Somalia Prime Minister Nur Hassan Hussein, also known as “Nur Adde,” died on April 1, from coronavirus complications, after being on admission at the King’s College Hospital in London for over two weeks.

The 82-year-old Hussein was Somalia’s Prime Minister between November 2007 and February 2009, and was a one-time attorney general of the country under the tenure of President Siad Barre who was overthrown in 1991.

Hussein led Somalia as its Prime Minister during a crucial transitional period beset by insurgency and humanitarian crises.

Former Libyan Prime Minister, Mahmud Jibril, who was a former head of the rebel government that overthrew Muammar Gaddafi in 2011, died in an Egyptian hospital of the coronavirus on April 5.

The 68-year-old former Prime Minister was in Cairo where he had been hospitalised for two weeks. He was admitted to the hospital on March 21 after suffering a heart attack, before testing positive for the virus and died while being quarantined.

He served as head of the interim government in March 2011, a few weeks after the outbreak of the Arab Spring uprising in Libya.

On April 11, Togo was thrown into mourning with the announcement of the death of her former Prime Minister, Edem Kodjo, who died in a French hospital following a protracted illness.

The former diplomat who had two stints as Prime Minister, died at the age of 82. His first period as PM was from 1994 to 1996 and again from 2005 to 2006 under former President Gnassingbe Eyadema.

Kodjo also held a number of ministerial posts in the country, serving as the Minister of Finance from 1973 to 1976 and as Minister of Foreign Affairs from 1976 to 1978 under Eyadéma.

He was elected as the Secretary-General of the Organisation of African Unity (OAU) at its summit in Khartoum on July 18–22, 1978.

In June, Burundi’s outgoing president at the time, Pierre Nkurunziza, died in office just after the presidential polls, even before his successor, Evariste Ndayishimiye, was to be sworn into office.

The official account said Nkurunziza died of respiratory issues but some accounts had it that he died of COVID-19 complications.

Nkurunziza who was in office for 15 years, had been hailed for accepting to step down despite the opportunity to continue in office. He came into office at the age of 40 and bowed out at 55 years.

Also in June, on the 11th to be precise, former Gabonese Prime Minister, Emmanuel Issoze-Ngondet, passed on and his death was announced by incumbent President Ali Bongo in a tweet that sent the country into a frenzy of mourning.

“The ex-PM was a great servant of the state, who dedicated his life to Gabon and Gabonese. Emmanuel Issoze Ngondet left today, too soon. It is a huge loss for our country.”

Issoze-Ngondet served as Prime Minister between 2016 and 2019 till he was replaced by Julien Nkoghe Bekale who has since been replaced by Christiane Ossouka Raponda.

In July of 2020, Ivory Coast Prime Minister, Amadou Gon Coulibaly, died at the age of 61 at a private hospital in Abidjan, the country’s capital.

Coulibaly’s death threw the West African country into turmoil as the search for a new president when the October 2020 polls were held was put on hold at the time.

The deceased was said to have just returned home a week earlier after a two-month absence during which period he was receiving medical treatment in France.

Coulibaly, a close ally of President Alassane Ouattara, had held the Prime Minister portfolio since 2017. He was the presidential candidate of the ruling party but with his death, Ouattara rescinded on his promise to quit, and went ahead to contest in a poll boycotted by the opposition and won by over 95% of votes.

Former President of Tanzania, Benjamin William Mkapa, also died in July at the age of 81. As announced by the country’s presidency, Mkapa died while on admission at a Dar es Salaam hospital where he was receiving treatment.

Following the death of Mkapa, President John Magufuli declared a seven-day national mourning period with flags flown at half-mast. Born on November 12, 1938, Mkapa led Tanzania from 1995 to 2005 before handing over to Jakaya Mrisho Kikwete.

Mkapa was the third president of the East African nation and led several regional peace mediation efforts while in office and afterwards in the region, including his big role in mediating Kenya’s 2007 post-election crisis.

On November 12, 2020, Africa lost one of its most respected leaders with the death of former Ghanaian President, Jerry Rawlings, at the age of 73.

Rawlings was Ghana’s longest serving leader and had served about a third of Ghana’s post-independence years, a total of 20 years.

He had two stints as a military ruler and two terms as a democratically elected president, only stepping down in the year 2000. Rawlings died while receiving treatment in the nation’s premier hospital, the Korle Bu Teaching Hospital.

Rawlings had been on admission at the hospital for about a week for what was rumoured to be a result of coronavirus complications.

Also in November, the former president of Mali, Amadou Toumani Toure died at the age of 72 at a hospital in Turkey. He was said to be recovering from a heart operation he had in Bamako before his condition deteriorated, prompting his evacuation to Turkey.

Touré was president of Mali from 2002 to 2012 before being overthrown in a military coup. His successor, Ibrahim Boubacar Keita, was also overthrown in 2020 by a mutiny following widespread anti-government protests.

The retired Army Colonel was President of Niger from 1999 to 2010 when he was overthrown in a military coup d’état.

In 2004, he was reelected as president but was once again overthrown in a military coup following an alteration of the constitution to allow him to stay in power for life and his handling of a hunger crisis caused by drought and locusts plague.

November 2020 also claimed the life of Sadiq al-Mahdi, the former Prime Minister of Sudan, who died at the age of 84 in a hospital in the United Arab Emirates from COVID-19 complications.

Sadiq al-Mahdi was Sudan’s last democratically elected prime minister and leader of the country’s largest political party, the National Congress Party (NCP), which dominated domestic politics in the country from its foundation until the Sudanese Revolution.

Al-Mahdi was overthrown in a 1989 coup that brought longtime ruler Omar al-Bashir to power and nearly three decades later, Al-Mahdi’s party alliance with a pro-democracy uprising forced the military to overthrow al-Bashir in April 2019.