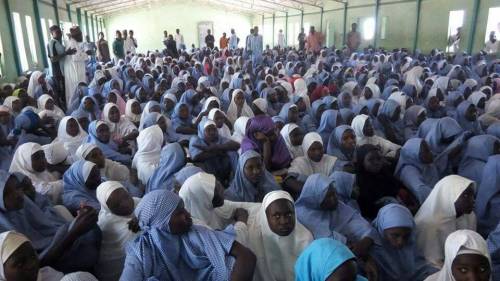 Reactions and conflicting accounts surrounding the actual status and number of girls said to be missing from Government Girls Technical College, Dapchi following suspected Boko Haram invasion of the school on Monday have continued, even as President Muhammadu Buhari has directed the ministers of defence, Mansur Dan-Ali; information, Lai Mohammed; and foreign affairs, Geoffrey Onyeama, to go to Dapchi village in Yobe to assess the reported abduction of schoolgirls, while also directing military takeover of the school premises.

Mohammed disclosed the president’s move when he briefed State House correspondents after the meeting of the Federal Executive Council (FEC).

“Mr President has directed military and other security agencies to take immediate charge and control of Government Girls Technical College, Dapchi, and inform him of developments.

“He has released a delegation led by the Minister of Defence to Dapchi, to get firsthand information as to what is happening.

“Others in the delegation are Minister of Foreign Affairs and Minister of Information,’’ he said

The police in Yobe had on Tuesday confirmed an attack on the school in Dapchi, Bursari Local Government Area of Yobe, by suspected members of the Boko Haram sect.

But the exact number and status of missing girls or girls still unaccounted for remains a subject of conflict as there have been different official accounts.

Speaking earlier, one of the teachers in the school was quoted to have said a headcount was taken after the attack.

“After the roll call, 610 out the total number of 704 students have returned. We are still searching for the remaining 94 students,” he was quoted to have said.

“We cannot say [if they have been abducted], because the insurgents went into the students’ hostel, and many of these students scaled the fence and escaped into the bushes.”

The Yobe State government however said 48 of the 94 students who were declared missing after Monday’s attack had returned.

Mohammed Lamin, the state commissioner for education, disclosed that while 28 of the missing students returned on Tuesday night, 20 more returned on Wednesday morning.

“This has brought down the 94 missing students realised at the yesterday headcount to 48 this morning,” he said.

“We are still hopeful that more are returning soon.”

Most of the students were said to have been rescued by villagers in bushes around Dapchi.

But in a contradictory account, the Yobe police command said a total of 111 and not 94 students reported by the government were still unaccounted for.

Abdulmaliki Sumonu, the state commissioner of police, made the disclosure.

Addressing journalists in Damaturu, the state capital, Sumonu said, “815 out of the 926 students were physically seen in the school as of Tuesday.

“There are reports that more girls have returned to the school after the headcount”.

The commissioner added there were no reports of abductions or deaths inside the school.

He added, “I asked the school’s principal if there were abductions or deaths in the school and she said no.

“I am not unaware of the rumours going on, l want to appeal to the press and the society to please cooperate with the security agencies in this situation.”

Meanwhile, the Peoples Democratic Party (PDP) has also reacted to the development.

The party has expressed shock over reports that scores of female students have been abducted.

The party in a statement on Wednessday signed by its publicity secretary, Kola Ologbodiyan, urged security agencies to ensure the safe return of the girls.

The PDP expressed hope that the girls will soon be found.

“Indeed, we are very disturbed by this ugly development especially given the conflicting reports on the whereabouts of these innocent girls.

“Our party restates that the life, safety and wellbeing of all Nigerians remain of paramount importance to us and we therefore insist that all efforts must be exerted to find these students.

“The PDP is monitoring development on the position of the Nigeria Police investigation of the matter. We however charge the Inspector General of Police to immediately put all machinery in place to unravel this disturbing situation and recover the missing children”, the party said.