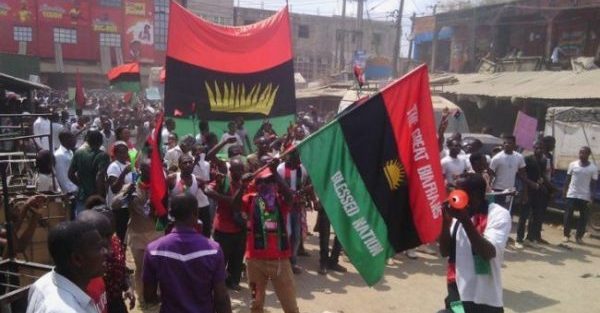 The Indigenous People of Biafra (IPOB) has revealed that fourteen different pro-Biafra groups will team up to mark this year’s May 30 ‘Biafra Day’ celebration in the South East.

IPOB also revealed that the celebration will witness plans to honour some nations and organisations which they said have remained friendly to the Biafra cause over the years.

That much information was revealed in a statement signed on Monday by Uchenna Madu, and leaders of other pro-Biafra groups which was made available to newsmen in Abakaliki, Ebonyi State.

IPOB in the statement said in addition to ‘friendly’ nations and organisations, some individuals who have also contributed to the Biafra cause would be honoured on that day.

The statement by IPOB reads in part: “On May 30, the members of all pro-Biafra groups and entire people of Biafra will converge on a stadium for the Biafra anniversary convention. Some reputable and erudite scholars will deliver speeches on Biafra and her quest for freedom.

“We agreed on a more eloquent and interactive commemoration anniversary where the members and people of Biafra will interface and reflect soberly on the real issues concerning Biafra emancipation.

“Pro-Biafra groups have unanimously agreed and resolved to jointly observe, commemorate and celebrate the 52 years anniversary of Biafra declaration by our foremost leader, Dim Chukwuemeka Odumegwu Ojukwu (Eze Igbo Gburugburu) on May 30, 1967.

“MASSOB and other pro-Biafra groups will observe the May 30 Biafra day in a unique form that will attract the presence of notable indigenous leaders of ethnic nationalities to Biafra land.

“As we planned to honour and celebrate the heroic exploits of our gallant Biafran soldiers and other individuals who contributed immensely towards the progress of Biafra, we shall also honour other individuals, friendly nations and organisations that assisted immensely in the survival of the people of Biafra.

“The May 30 anniversary convention will also attract notable Biafra leaders from Ikot Ekpene, Ijaw, Igbo, Calabar and Bakassi people. There shall be special prayers and supplication for the fallen Biafra heroes during the Nigeria-Biafra war and our comrades that were killed by Nigeria security agents including the people of Biafra who died in the hands of Islamic Boko Haram and Fulani herdsmen.

“As every revolutionary struggle has its own methodologies, the coalition of pro-Biafra groups will continue to introduce new and positive dimensions that will eloquently and convincingly harp on the need of the hours.

“Until the diverse ethnic nationalities that make up the Biafra nation come together, liaise together, interface, and agreed on the strategic ways forward, Biafra actualisation may be mere wishes,” the statement added.