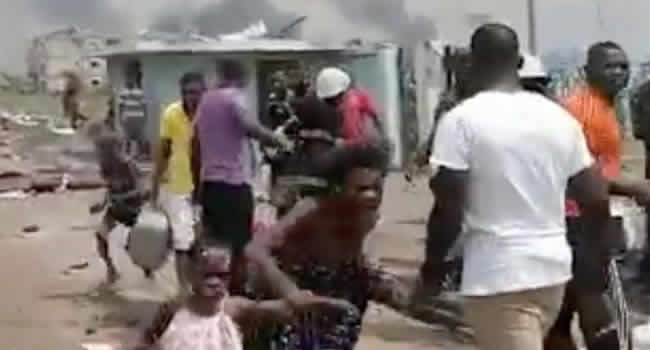 Not less than 20 people have been killed while 600 were injured after four powerful blasts hit the Nkoa Ntoma military camp in the economic capital Bata in Equatorial Guinea on Sunday, the state television reported.

The TVGE channel broadcast footage of wrecked and burning buildings, with people, including children, being pulled from the rubble and the wounded lying on a hospital floor.

The first blast reportedly occurred in the early afternoon and in the early evening with the TVGE referring to heavy “casualties” but said it had not determined whether there were any fatalities.

“We heard the explosions and we saw the smoke, but we don’t know what’s going on,” one local resident, Teodoro Nguema, said on television.

The camp houses, among others, elements of the army’s special forces and the paramilitary gendarmerie, a journalist said.

Bata is the largest city in the oil and gas-rich nation, with around 800,000 of the nation’s 1.4 million population living there, most of them in poverty.

While it sits on the mainland, the capital Malabo is on Bioko, one of the country’s islands off the West African coast.

Equatorial Guinea has been ruled by 78-year-old President Teodoro Obiang Nguema for nearly 42 years while his son, Teodoro Nguema Obiang Mangue, described as jet-setter, the vice president with responsibility for defense and security, often appearing on television accompanied by his Israeli bodyguards.

In December last year, the UN’s top court found in favor of France in a bitter battle over a swanky Paris property seized in a corruption probe into Teodorin.

The authoritarian leader has seen off at least half a dozen assassinations or coup attempts to become Africa’s longest-serving leader.