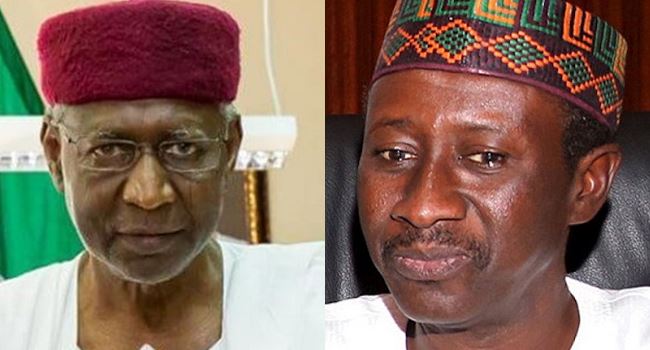 The Peoples Democratic Party (PDP) has stated that the feud between the National Security Adviser (NSA), Major Gen. Babagana Monguno (rtd), and the President’s Chief of Staff, Abba Kyari clearly shows that the president has relinquished control of the nation’s affairs.

The party stated that the statement credited to Monguno’s that Kyari was unnecessarily meddling in matters of state security in the country, had validated its position that President Muhammadu Buhari had abdicated the responsibilities of his office.

The NSA, in a leaked memo, had accused the CoS to the President, of unwarranted “meddlesomeness” on matters of national security, and had fired a warning memo to all service chiefs to desist from taking further directives from the President’s Chief of Staff.

In the memo dated December 9, 2019, the NSA accused Kyari of issuing directives to the service chiefs without the knowledge or approval of President Buhari, and sidelining him (NSA) in making strategic decisions in national security operations.

Reacting to the development, the opposition PDP in a statement by its National Publicity secretary, Kola Ologbondiyan In Monday, said it was time for Buhari to resign, as the NSA’s letter further exposed the “fact that our nation has been on autopilot under President Buhari”.

The party said, “Following Monguno’s revelation, we reiterate earlier position that President Buhari should waste no further time in relinquishing his position as President since it is now obvious that he has become overwhelmed by official duties.

“The PDP holds that security is the most important element of governance, followed by the welfare of citizens and since President Buhari has relinquished these statutory responsibilities, he has no other reason to remain in office.

“The NSA’s letter further exposes the fact that our nation has been on autopilot under President Buhari, whose abdication of serious matters of state is directly responsible for the untold suffering, anguish, pain and escalated insecurity in the country.

“The PDP describes the Gen. Monguno revelation as a national tragedy which showcases the fact that Mr. President Buhari has become so irredeemably overwhelmed to the extent that the responsibilities of his office, including presiding over very sensitive security matters, have now been taken over by his Chief of Staff, Mallam Abba Kyari, who functions as a defacto President.

“Nigerians are invited to note the verdict by the NSA, who, in support of the position of the PDP, affirmed that such situation is responsible for the failure of government to defend Nigerians and find solution to the worsened insecurity under President Buhari’s watch.

“Our party recalls that even the First Lady, Aisha Buhari, had severally alerted that strange elements had usurped the functions of the president and urged Nigerians to speak out for their country.

“It is now clear that the demand by Nigerians calling on President Buhari to resign was borne out of patriotism and love for our country,” the party said.