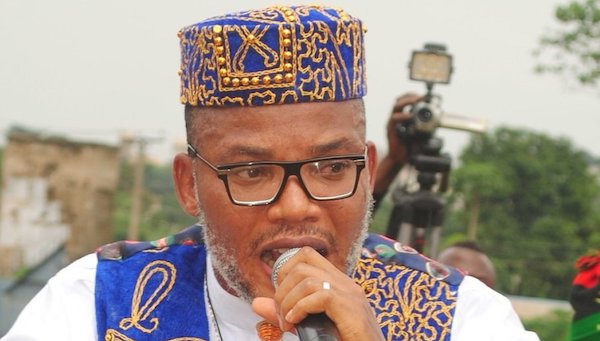 The pan Yoruba socio-political organisation, Afenifere, on Wednesday criticised the Federal Government for filing amended charges against the leader of the Indigenous People of Biafra (IPOB), Nnamdi Kanu.

The federal government had on Monday filed an amended seven-count charge against the IPOB leader at the Federal High Court, Abuja.

Kanu will appear in court on Thursday.

However, in a statement issued by its Secretary-General, Mr. Sola Ebiseni, said the development means that the case had come to its end.

The statement read: “With the amended seven-count charge against Nnamdi Kanu as released by the media, it appears the Federal Government has come to its wit’s end in the case with the Biafran leader and self-determination agitations generally.

“Without prejudice to the determination of the case by the court, it is clear that its end will certainly compound agitations on the national question, an ill-wind that will blow the Buhari administration and Nigeria no good.

“It is time that the Attorney General of the Federation and Minister of Justice, Abubakar Malami exercised authoritative superintendence over his office as the Chief Law Officer and adviser of the Federal Government in a way that the interest of the nation may be served than indulging in petty politicking to massage the ego and pander to the personal idiosyncrasies of the President.

“For instance, the alleged name-calling of Muhammadu Buhari, in April 2015, even before he became the President, would ordinarily be ignored as childish vulgar abuse unworthy of a high profile criminal prosecution.

“A government that admits that mere words of Kanu had become law, either by legitimate obedience or fear, even while in detention, should think out of the box.

“The appropriate mindset is to admit that Nigeria, as a wobbling contraption of entrenched nationalities, is negotiable and that negotiations do not necessarily lead to dismemberment. Let the dialogue begin.”