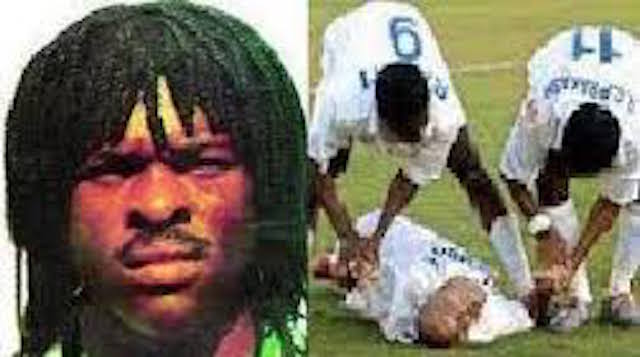 The Minister of Youth and Sports development, Sunday Dare has done as he promised by paying a special visit to the family of late footballer, Samuel Okwaraji.

Dare had last Wednesday paid a similar visit to the mother of late Rashidi Yekini in Kwara State, with food items and cash gifts.

The same gesture was Sunday extended to Mrs. Janet Okwaraji in Abakpa-Nike in Enugu State.

The Minister, who was represented by Bamidele Ajayi at the home of the late Eagles star, donated various foodstuff and provisions as well as cash gift of #50,000.

Late Okwaraji died while playing for Nigeria, during a World Cup qualifying match against Angola at the National Stadium, Surulere, Lagos in August, 1989.

The Minister explained that the gesture was to assist the ex-player’s mother in her old age as a mark of honour for the contribution of her son to Nigerian football.

Responding on behalf of the family, the eldest son of the Okwarajis, Mr. Patrick Okwaraji, who received the Minister’s representative as their mother was slightly indisposed, expressed the family’s appreciation for the kind gesture.

“I thank the Minister for deeming it worthy to do this. It is very encouraging that this is the first and only Minister to support the family. We are indeed very grateful,” said Patrick.