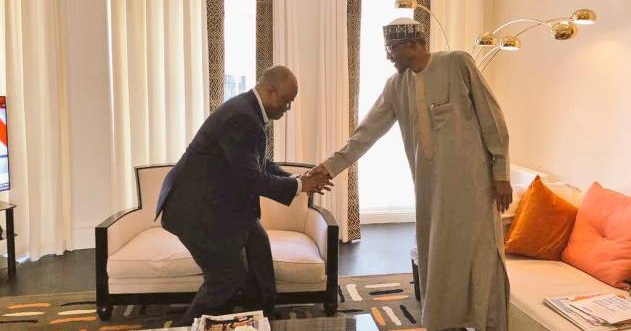 If there are still doubts that the former governor of Akwa Ibom State, Godswill Akpabio, is warming up to defect to the ruling All Progressives Congress, APC, that should be laid to rest now, as the Senate Minority Leader, Sunday, visited President Muhammadu Buhari in London.

The Personal Assistant to the President on Social Media, Bashir Ahmad, posted pictures of Akpabio with President Buhari on Sunday on his personal Twitter handle.

In the tweet, which had Akpabio in handshake with the President and another where he posed for a photograph with Buhari who is vacationing in London, Ahmad tweeted “Senate Minority Leader, Godswill Akpabio visited PMB in London on Sunday.”

It will be recalled that Akpabio was recently pictured with the National Leader of the APC, Asiwaju Bola Ahmed Tinubu in Lagos. Shortly after the picture emerged, reports surfaced that the Acting President, Yemi Osinbajo, alongside other leaders of the APC are billed to formally welcome the Senator to the ruling party at a rally in Ikot Ekpene on Thursday this week.

The imminent defection of Akpabio has, however, been shrouded in controversies, as there are claims that the Senator was blackmailed by the APC in defecting, using the EFCC.