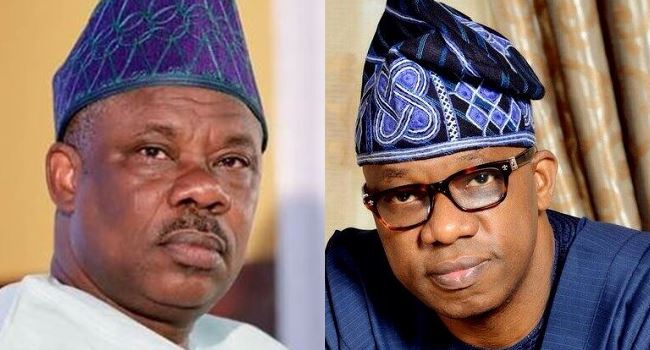 Former Ogun State Governor, Ibikunle Amosun and his successor, Dapo Abiodun, on Wednesday tried to outdo each other in order to take full credit for the $250 million loan facility the state just secured from the World Bank.

Though negotiations for the loan, initially meant to be $350 million, was started by the administration of the former Governor Amosun, the loan was eventually approved recently, with Governor Abiodun leading the charge.

Amosun, on Wednesday claimed that his administration began and facilitated the loan before he left office in 2019.

The former governor stated this in a statement issued by former Secretary to the State Government, Taiwo Adeoluwa, adding that it took his administration six years to process and actualise the loan.

“Now, at the last World Bank meeting, the hard labour and painstaking efforts of the Senator Amosun-led administration came to fruition with the provision of $250m grant for Ogun State.

“Recall that in 2019, before the end of Senator Amosun’s administration, we had processed the approval of both the Senate and the House of Representatives; we also had secured the nod of the Federal Executive Council.

“We did all the paperwork. We are immensely proud that once again, we bequeathed a handsome and significant $250m in virtually interest-free grant to Ogun State“, the statement read in part.

The state government, not wanting to be outshines, fired a counter statement, claiming that the facility was a result of Abiodun’s various interactions on the economic blueprint and development roadmap for the state which he had with the officials of World Bank.

In the statement issued by the governor’s Special Adviser on Public Communications, Remmy Hazzan, Abiodun said: “Recall that the project facility suffered a major setback and in fact was reduced from the original amount of $350m because of the slow utilisation of the initial preparatory allowance of $5m and the poor implementation of the preparatory phases of the project facility by the previous administration.”

Related Topics:AbiodunAmosunogun state
Up Next

CAN finds fault with release of terrorists, govt silence on alleged Turkish funding of Boko Haram