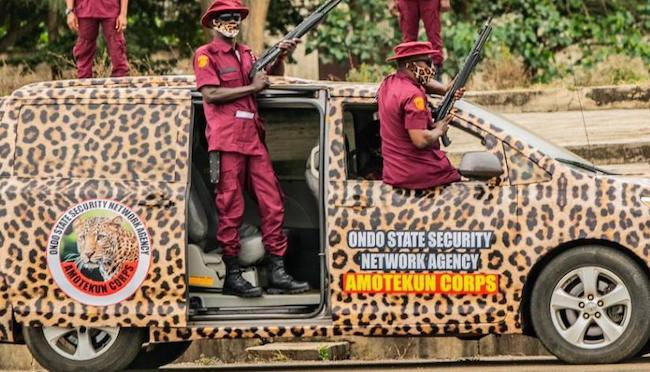 As part of efforts to beef up security in Ondo State, especially during the festive period, the South-West Security Network Agency, popularly known as Amotekun Corps has impounded about 50 vehicles with unauthorised tinted glasses.

In a media parley at the headquarters of Amotekun corps in Ondo on Thursday, the Commander of the Corps in the state, Adetunji Adeleye, said the government had earlier given a two-week ultimatum to all vehicle users with tinted glasses to obtain police permits.

According to him, some hoodlums are fond of hiding under the darkness of the tinted glasses at night, moving around and using such vehicles to commit evil acts in the state.

Adeleye noted that recently, there was an intelligence report that bandits were about to strike and carry out nefarious activities in some parts of the southwest, and the public was notified of it.

He noted that subsequently, there were armed robbery attacks in some of the areas mentioned in the report; one in Ekiti and another one in Osun State, adding that operatives of the Amotekun Corps, the Nigerian Police, and the Nigeria Security and Civil Defence Corps (NSCDC) were already positioned on the major roads in the state to enforce the directive.

Meanwhile, the Amotekun boss debunked the allegation that some of its officers were going around checking people’s phones and demanding vehicle particulars of motorists on the roads.

He described the allegations as cheap social media blackmail which could not prevent the security agents from ensuring the safety of the residents of the state.