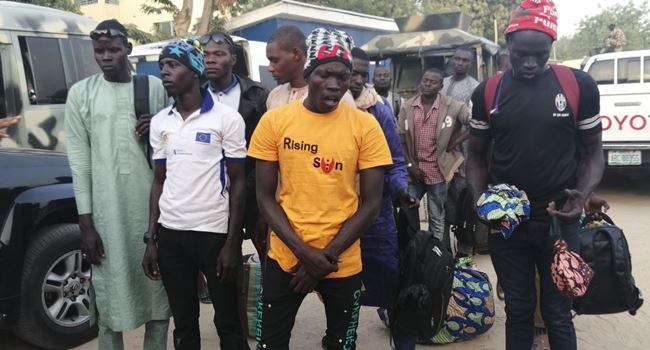 The Nigerian Army has handed to Borno State government, some Boko Haram terrorists it said had repented from killing people and committing other atrocities.

They were brought in from Niger Republic, where they surrendered to the Nigerien troops, along with their wives and children.

Major General Bamidele Shafa, the coordinator of the Federal Government Safe Corridor programme, states that, the Nigerien government contacted the Nigerian government after the former Boko Haram members laid down their arms.

“We have just delivered 25 persons, comprising men, women, and children.

“So we have brought them home safely and handed them to the Borno State government for onward rehabilitation as part of the Operation Safe Corridor de-radicalization programme,” Shafa said.

He then sent a message to members of the terrorist group still fighting and said, “We are using this opportunity to encourage those that are still in the bush to come out because the president of the Federal Republic has given them an open arm to drop their weapons and embrace peace.”

Meanwhile, the Borno State’s Commissioner of Women Affairs, Zuwaira Gambo, who received the repentant terrorists and their family members, assured that the government would provide them with psychosocial support, food, cloth and some form of education and skills acquisition.