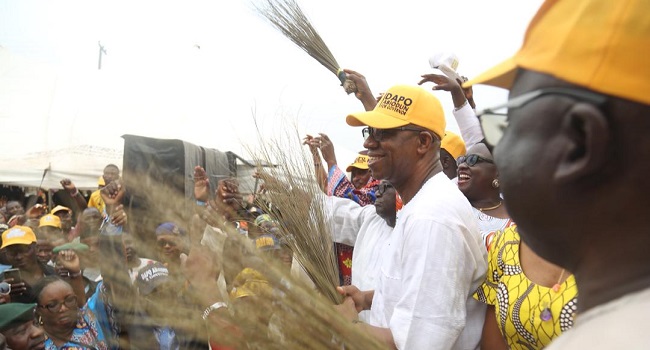 Governor Ibikunle Amosun of Ogun State failed to attend the flag off ceremony of the governorship candidate of his part, the All Progressives Congress (APC) in the State, Dapo Abiodun.

The campaign, which held at Atan, the administrative headquarters of Ijebu -North-East Local Government Area of the state was also without the party structures belonging to the camp of the governor.

Amosun has overtly expressed his resent for Dapo Abiodun who became the candidate of the party in the state as against his (Amosun’s) preferred candidate, Abdulkabir Akinlade who defected to the Allied People’s Movement (APM) and has become the flag bearer of the party.

The governor who is the All Progressives Congress senatorial candidate for Ogun central had on Sunday presented Akinlade to the President at the presidential villa.

The presidency, however clarifies after the visit, that President Muhammadu Buhari would support the APC candidate, Abiodun, as against Amosun’s preferred, Akinlade.

But Abiodun was not deterred by Amosun’s moves as he presented his manifesto to the people of the state, emphasising workers’ welfare.

His words: “By returning power to local government chairmen to operate unfettered, council bosses will no longer have to go to Abeokuta to beg for funds to run their administration.

“They will be like mayors, like what we have in the advanced countries. By so doing, they will have time to deliver good programmes for the people of their immediate communities.

“Also, there will be prompt payment of salaries of teachers and civil servants in the state, without delay. “Don’t be confused, but ensure you cast your votes for as your next governor of Ogun State.

A former Deputy Governor of Ogun State, Senator Gbenga Kaka, who attended the rally urged the people of the state to watch out for candidates to vote for while he assured that the APC candidate and his running mate, Mrs Noimot Salako-Oyedele, enjoyed the support of the President.

Kaka said, “Except those who are blind would not be able to differentiate what is good from bad.

“You are to follow a right path by casting your votes for a good candidate like Dapo Abiodun as your next governor of Ogun State.

“He and his running mate, enjoy strong support from the Federal, State and local government levels”, said Kaka.

Speaking on behalf of the traditional rulers, High Chief Durojaiye Olugbode, assured of the support of council of Obas in the state.