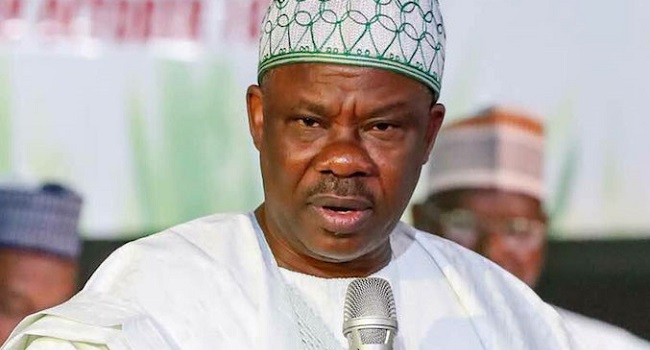 The Ogun State governor, Ibikunle Amosun is clearly not happy with the decision of the All Progressives Congress (APC) to dissolve the Ogun State executive body of the party at all levels.

He has therefore vowed that the supposed dissolved executive and himself, are ready to use their votes to show the Adams Oshiomhole-led National Working Committee (NWC) of the party and those supporting them, that Ogun State belongs to them.

The governor stated this on Friday when he addressed members of the APC at the party’s secretariat in Abeokuta, assuring that nothing would happen to the state executive body said to have been dissolved.

Earlier in the day APC NWC had announced the setting up of a caretaker committee headed by Chief Yemi Sanusi to superintend the party in the state. It appointed Mr Ayobami Olubori as the Secretary and Mr. Tunde Oladunjoye as the Publicity Secretary of the committee.

NWC said the committee will report directly to it.

APC had dissolved the party executives in Ogun and Imo states on the position of Governor Amosun and his Imo counterpart, Rochas Okorocha to work against APC in their states.

The governors, who though had assured they were going to mobilise support for Buhari in 2019, insisted they would work for their anointed governorship candidates, who dumped the APC for other parties following their failures to secure the ruling party’s ticket.

But Amosun speaking on the development in Ogun, said the dissolved Chief Derin Adebiyi led executive in the state would spend four years in office not minding the purported inauguration of a caretaker committee by the Oshiomhole NWC.

“You know me by now. For me, I fear God and I respect people. So, it won’t be because we are afraid or we don’t want to talk. Where we are now, what we should concentrate on is to let them know that Ogun State is the home of President Buhari and we must vote massively for him.

“This is the home of the APC. We are human beings. We are no God and that is why we are telling them that in this coming election in Ogun State, it is whoever all of you (people) decide to back that will win the election.

READ ALSO: IMO: Uzodinma is change, his govt ‘will be based on merit, not family connection’- Oshiomhole

“So, the best way to answer them is through our action. And what is the action? We will use our votes to let them know who owns Ogun State. So, if they are looking for a state to destroy, they should not think of Ogun. We are ready for them.

“We don’t fear them. All of them put together, we don’t fear anybody. We fear God and we fear President Muhammadu Buhari.

“We have decided to let them be for the sake of President Buhari. If not for the President, we know what to do. Just ignore them. Don’t engage them for anything. Let us be focused and redouble our efforts so that in the coming election, we are going to answer them with our votes.

“I want to assure you that this executive that God has used you to put together will be there for the next four years. They will serve their term.”

WAEC FORGERY: Call for my arrest by Reps is corruption fighting back- Obono-Obla