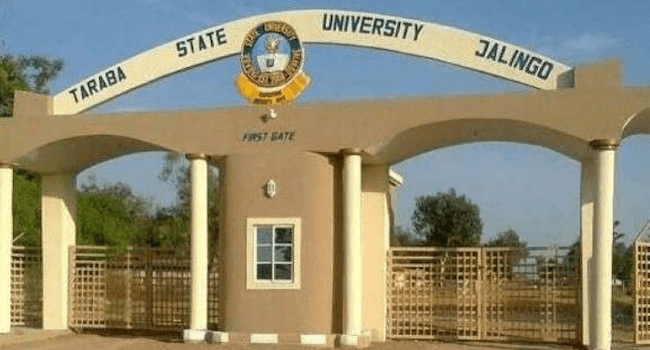 The Academic Staff Union of Universities (ASUU) Taraba State University Chapter, on Tuesday declared an indefinite strike over the refusal of the state government to address its demands on staff.

The ASUU Chairman in the institution, Dr. Samuel Shikaa, who disclosed this at a media briefing at the end of a meeting in the university, said the members resolved to embark on the industrial action to demand compliance with an agreement reached between the union, the university management, and the state government.

The ASUU’s demands include the commencement of their contributory pension scheme and prompt payment of their Earned Academic Allowance ( EAA), among others.

He said: “Taraba State University has no pension arrangement and you can quote me anywhere.

“Families of some of our colleagues that have died only received paltry sums for burial rites which to us are not terminal benefits.

“And to some others who left this institution to other universities, they have nothing to benefit.

“Our members are ready to commence deduction from their take home for the contributory pension scheme but we also want government’s commitment that their percentage of the contribution will be honoured.

“The EAA allowance for excess workload since 2013 has accumulated and has not been paid.”

However, the Vice-Chancellor of the university, Prof. Vincent Tenebe, said 75 percent of the demands by ASUU members had been met.

Tenebe said the strike was unnecessary and urged members of the union to call off their demonstration in the interest of the students.

He also dismissed claims that the government was not ready to comply with its part payment to the contributory pension scheme.

The VC said: “Ever since the MoU was signed with ASUU, the management and government went into action and I can tell you that 75 percent of their demands have been met.

“ASUU has been demanding the commencement of the contributory pension scheme and when I came in as Vice-Chancellor in 2017, they brought up this demand which was part of the MoA.

“I went further to present a memo to the governing council of this university in 2018 and the council acting as an independent body and regarded as the sole employer of labour in universities by government regulation, approved that we can start that contributory pension scheme.

“This means that every member of staff that keys into this pension scheme will contribute 7.5 per cent of his basic salary while the government will also contribute 7.5 percent which will be sent to the administrator of a pension for saving till when the employee retires.

“After that approval, I informed all the members of staff of this university through a circular that the governing council has approved the commencement of the pension scheme and we went further to appoint a desk officer from the registry for the pension scheme.

“We also invited some pension administrators who came to create awareness and also did some marketing of their companies to staff for them to fill their forms and submit to the school management for the commencement of the pension scheme.

“Since 2018, they have failed to produce their pension administrators and their account numbers for management to utilise and in fact, this university wanted to be used as a role model for other institutions in this state.”

Related Topics:ASUUTaraba varsity
Up Next