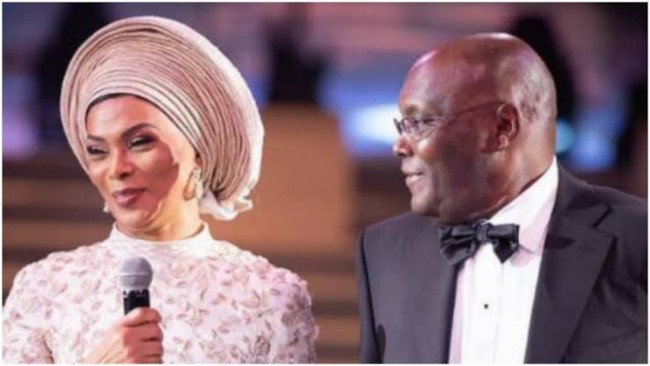 Jennifer Douglas-Atiku, one of the wives of the former Vice President of Nigeria, Atiku Abubakar has explained why she divorced him.

In a statement she released and obtained by Ripples Nigeria, the estranged wife of the former Presidential aspirant explained that she did not leave the marriage over his latest acquisition of a new wife.

She revealed that she ended the marriage because there were issues over her refusal to return to Nigeria, as she preferred to remain in the United Kingdom so she could look after her children.

Jennifer went on to state that there were several other reasons for their separation.

Jennifer had this to say about the latest scandal.

“The core reason for the divorce was disagreement over my continued stay in the United Kingdom, to look after my children and several other long-standing issues.

Addressing rumours that she ended her marriage because Atiku married a new wife, she stated;

“On June. 26, 2021, I asked His Excellency to grant me a divorce in light of the breakdown of our marriage.

“And, during that period, I told his Excellency that I remain at his Excellency’s service to continue to assist him in his activities even If I am no longer married to him. Suffice it to say that several friends of his Excellency tried to mediate in this matter.

“On Tuesday, 21 September, 2021, I asked His Excellency in another text whether he wanted me to pack up his clothes and give it to Rahim (his driver) since the driver on his instructions was moving his cars.

“I also asked Excellency in that text whether he wanted me to have Rahim pack up his office. Then his Excellency sent me a text back and asked: ‘So it’s true you have sold the villa?’ “

She revealed further that she was being threatened after she left the house in 2021.

“The last time I was in Nigeria I called to have the Asokoro and Yola documents delivered to him.

“It was never picked up and I still state that Excellency is free to send someone to have the documents picked up anytime he deems fit.

“Since this incident, I fear for my safety and that of my kids. His Excellency’s security operatives especially Ibro and others have been making threats and calling my relatives, friends and staff and searching for my assets to seize and monitoring my phone calls and those of friends and relatives. For that reason, I have exited my law firm and sold all my assets and moved abroad until peace reigns.

“I have done nothing wrong except to ask for a divorce and it pains me that I have to use this medium to address thorny issues but fear that at this point, I would have to put my side of the story on record.

“It is obvious that a campaign of calumny to totally discredit and put me in bad light has begun.

“Despite all that has happened, I reiterate that I asked for a quiet divorce which had it been granted, we would not be where we are today. Divorce is never an easy process for both parties.

“I reiterate that I hope we can settle our issues privately and I would remain at His Excellency’s service should he need my help, anytime”, she stated.

Related Topics:AtikudivorceJennifer Douglas
Up Next

The Power of Davido Feature and Some Artists that Benefited