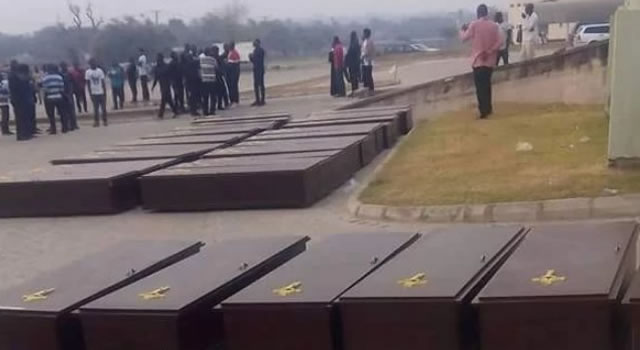 Benue State is planning another mass burial for victims of suspected herdsmen attacks.

In January, the state buried 73 persons who were allegedly killed by herdsmen in two local government areas.

A fresh round of crisis between suspected herdsmen and residents of Omusu Edimoga in Okpokwu Local Government Area of Benue State has reportedly led to 24 persons being killed.

In reaction, Samuel Ortom, governor of the state, ordered that the victims of the latest attacks be buried on Friday.

The attackers were said to have invaded the community after they reportedly lost their cattle and two herdsmen.

The Benue police command said trouble started after two herdsmen were declared missing on Monday morning at about 7:30am.

Some irate youth from Omutu were said to have engaged the herdsmen in a fight, during which some of their cows were rustled.

A peace meeting was subsequently convened by Olofu Ogwuche, chairman of the local government, and the head of the Fulani community in the area.

The police were mandated to look for the missing herdsmen.

However, the progress made was derailed after one of the herdsmen was reportedly found dead.

Ogwuche said 24 persons were killed in the incident.

In a statement on Tuesday, Moses Yamu, spokesman of the police in the state, said the “herdsmen surreptitiously went on rampage, resulting in stabbing to death of 15 persons mainly women and children, while some houses were set ablaze.”

He added that four suspects had so far been arrested in connection with the incident while security had been reinforced in the affected area.

APC divide widens as Lagos kicks against tenure extension for Oyegun, others