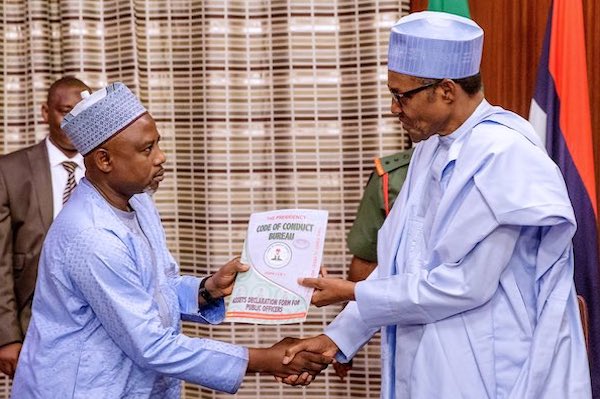 Ahead of his second term inauguration, President Muhammadu Monday received assets declaration form from the Code of Conduct Bureau (CBB).

The form was presented to him at the State House Abuja by the chairman of CCB, Professor Muhammad.

In a message on the official Twitter handle of one the President’s aide, Bashir Armed, Buhari after receiving the assets declaration form, promised “to fill and submit the form without much delay.”

The development is coming as the CCB had earlier hinted that it was expecting Buhari and his Vice, Yemi Osinbajo, to submit their forms before their coming inauguration for second term in office on Wednesday.

Speaking further, Buhari said that he will be hunted after 2023 by corrupt leaders in the country who are currently facing charges for their different activities.

He said the corrupt leaders believed that they should not be touched despite their evil activities that have affected the country a lot.

President Buhari pleaded with the team to keep his data intact as it may be needed to verify things about him when he will be probed after leaving the office.

His words; “I am very pleased that you are here, I assure you I will quickly fill this form and dispatched it back to you so that at the end of 2023, I believe there are a lot of people that will like to take it back on me.

“So please, make sure you keep it safe because there are people who believed they shouldn’t be questioned which they are being questioned and some of them are already in trouble.

“I expect them to fight back and this is one of the instruments. So I hope you will keep it.”

Going further, he said “I have never met you before. I thank you for accepting to be in this very important institution and I thank you very much for serving me my forms which I must fill constitutionally before my second term of office.

“I think we cannot overemphasize the importance of your office because Nigerians are notorious for cutting shortcut in serving and account public responsibilities and we are trying to impress our nation and the world that this administration is based on accountability.