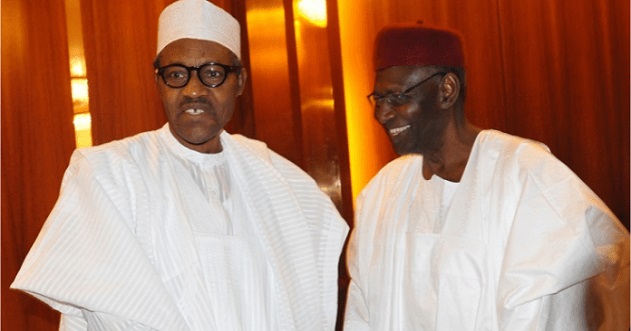 The Buhari Media Organisation (BMO) has defended President Muhammadu Buhari’s directive to newly sworn-in ministers to access his office through his Chief of Staff, Abba Kyari.

The directive sparked controversy as many Nigerians saw it as confirmation that Kyari was usurping some of the powers of the president as widely rumoured.

But dismissing the criticisms of the directive, BMO claimed it was standard global practice.

A statement from the group on Friday said, “The office of the Chief of Staff (CoS) to the President is not only the hub of most issues that require the President’s attention but also of paramount importance for the smooth running of the administration.

“President Muhammadu Buhari’s directive to his Ministers to channel their submission to him through his Chief of Staff, Mallam Abba Kyeri, is quite in order. It is in fact standard practice globally”.

In the statement signed by its Chairman, Niyi Akinsiju and Secretary, Cassidy Madueke, the group said critics of the directive were either uninformed or were hoodwinkers.

“For the avoidance of doubt, no new power has been conferred on the office of the Chief of Staff except that the President has chosen to run an administration that is better organized.

“We also wish to remind critics of this directive that in developed societies, especially the United States of America from where we copied our presidential system of government, the office of the Chief of Staff is key to driving the successful delivery of good governance to the citizens, and Nigeria’s case cannot be different.

“Additionally, the President, in his wisdom, is desirous of avoiding the staccato arrangement of the past that was disorderly and uncoordinated, even as it hampered the smooth running of government activities”, it said.

“We, therefore, implore Nigerians not to be taken in by the antics of the opposition Peoples Democratic Party (PDP) and a few disgruntled elements who never see anything good in an administration that is not only people-oriented but is focused at fighting corruption, improving the economy and combating the insurgency. The PDP should not equate its profligate era with the Buhari administration that is focused on rebuilding the country”, it added.