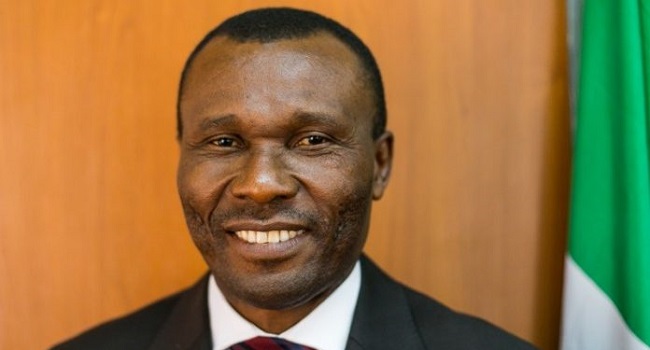 A cabinet member of President Muhammadu Buhari administration, Pastor Usani Usani, has described as “a joke taken to far” his supposed suspension from the All Progressives Congress (APC) by the party’s National Working Committee (NWC).

Usani, who is the Minister of Niger Delta Affairs, was suspended last Friday alongside the state governors of Ogun and Imo, Ibikunle Amosun and Owelle Rochas Okorocha respectively, by the APC NWC over alleged anti-party activities.

Also suspended along with them was the director-general of the Voice of Nigeria (VON), Mr. Osita Okechukwu.

But Usani, who addressed reporters in Calabar on Sunday through the director general of his governorship campaign organization, Pastor Ekpenyong Cobham, said he was yet to receive any notification from APC regarding his alleged suspension.

Describing the acclaimed suspension as a joke, he stressed that suspension does not exist if procedures are not taken in line with the party’s constitution.

He said, “The constitution of the party is clear on cases of suspension: it clearly sites circumstances and outlines procedures to be taken to warrant and effect a suspension.

“If any suspension exists, Usani’s attention should be drawn to it. If such circumstances do not exist nor procedures taken in line with the party’s extant laws, then a suspension, invariably does not exist.

“The mark of loyalty to the party is the ability of the individuals to adequately represent the party and practice its ideals at all levels of society and helping it to victory in the midst of other contending forces that compete with the party’s interests.

“The loyalty of Pastor Usani to the cause of the APC has made him the symbol of the party in Cross River State and a repository of trust to all true party faithfuls.

“Usani has shown sufficient loyalty to the party by helping the party poll 722 against the PDP’s two votes in his polling unit and over 3, 000 for the APC versus 423 for PDP in his Abanakpai council ward in the just concluded presidential elections.

“Usani is the only APC leader in the state to produce his Federal Constituency representative in last Saturday’s general election. These and more define his loyalty to the party.

“To accuse such a man of anti-party activities and claim to suspend him from the party he helped to build is a joke taken too far, and unacceptable.

READ ALSO: Only those with integrity will make my next cabinet – Buhari

“To use our party to settle personal and domestic scores is unacceptable, and the perpetrators must be called to order.”

Meanwhile, Amosun had also on Sunday visited President Buhari in Abuja apparently to complain to him about his being suspended from the party and for him to intervene.

Amosun is openly working to ensure APC does not win the governorship election in Ogun State. He has seriously been campaigning for his anointed candidate, Adekunle Akinlade, who is the governorship candidate of the Allied Peoples Movement (APM) in the state.